Somebody wise has rightly said, “True happiness comes from the joy of deeds well done, the Zest of creating things new.” We, at BlogAdda, believe exactly in this adage. Zest for life could sometimes be described as the lust for life, the mad need to make every day different and to make every moment count. With the #ZestUpYourLife event in Goa, Tata Motors (one of the biggest auto company in India) and we tried to capture the same spirit of joie de vivre! 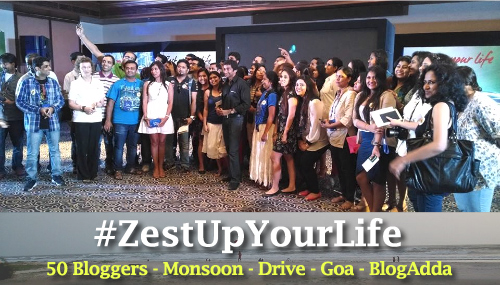 END_OF_DOCUMENT_TOKEN_TO_BE_REPLACED

The relationship we share with you grows stronger with time!

END_OF_DOCUMENT_TOKEN_TO_BE_REPLACED

We knew her here at BlogAdda, just the way the rest of the blogosphere did. Perhaps a tad more closely, for we loved the way she dipped words in her ink – Rehab Chougle or the author/ owner of outlandishmusings in the blog world.

END_OF_DOCUMENT_TOKEN_TO_BE_REPLACED

The number 13 is said to be lucky for some and unlucky for some other; however for India the number has definitely proved to be bearer of one of the strongest conversations in almost the last four decades. The 13th Indian Presidential Elections has shown the true picture of the (dis) harmony that exists within all the regional parties of India and how the voice of the masses never really matters, be it in direct or indirect voting.

END_OF_DOCUMENT_TOKEN_TO_BE_REPLACED

â€œIt is common senseâ€, the editors are screaming that the land of Bastar is often haunted by malaria and other deadly diseases. Journalists should survive on portable water and whenever such incidents happen, it is to be noted as â€œsadâ€. Instead of owing up to the fact that there should have been trainings in place, a precautionary handbook in existence, it is better to delve into reminiscing of how the young and jovial man was a wonderful asset to the company, but alas is no more.

END_OF_DOCUMENT_TOKEN_TO_BE_REPLACED

Come Sunday, and Indian Bloggers seem to be sitting in front of the television set, to watch and then blog about what is called India’s tribute to Oprah â€“ Satyamev Jayate. The talk show by Aamir Khan that seeks to bring out the social vices, through testimonies of victims and chat with experts has been topping the TRP’s ever since it was launched. Slotted at 11 AM every Sunday, the show provides to be the perfect watch with family, the middle class’ window to talking about what was earlier hushed and swept under the carpet.

There’s no denying the fact that the show has indeed helped filled the gaps of human connect in reality shows. However, there have been mixed reactions about the show in the blog world. While some seem to laud the efforts of Mr. Khan with flowery words of appreciation, a few are sceptical about what really the show entails. Analysis has shown that about 40% of the bloggers (out of around 40 blogs* analysed), have raised a doubt on the way the show is formatted. The recent upheaval about the half baked research on a particular episode has also created quite a stir in the social media sphere.