Come Sunday, and Indian Bloggers seem to be sitting in front of the television set, to watch and then blog about what is called India’s tribute to Oprah – Satyamev Jayate. The talk show by Aamir Khan that seeks to bring out the social vices, through testimonies of victims and chat with experts has been topping the TRP’s ever since it was launched. Slotted at 11 AM every Sunday, the show provides to be the perfect watch with family, the middle class’ window to talking about what was earlier hushed and swept under the carpet.

There’s no denying the fact that the show has indeed helped filled the gaps of human connect in reality shows. However, there have been mixed reactions about the show in the blog world. While some seem to laud the efforts of Mr. Khan with flowery words of appreciation, a few are sceptical about what really the show entails. Analysis has shown that about 40% of the bloggers (out of around 40 blogs* analysed), have raised a doubt on the way the show is formatted. The recent upheaval about the half baked research on a particular episode has also created quite a stir in the social media sphere.

On the other hand about 54% of the bloggers applaud Mr. Khan for being the face of “common issues” – things which have been discussed, yet never really connected to the masses like this. If we are to see, searches** about Mr. Khan reflect a rise on every Sunday, peaking just before and after the show’s episode. 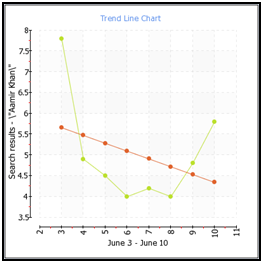 To quote the official online announcement of Star Plus (dated may 30, 2012) about the show’s success:

Satyamev Jayate has demonstrated a growth trend in its fourth week post launch. The show has delivered a historic reach of 37.4 crore people over the first 4 episodes aired in India. Cumulative Reach has doubled vs the launch week at 19 crore to the end of 4 week levels at 37.4 crores.  The ratings have grown vs. the past week. As per the TAM data for week 22, Satyamev Jayate ratings grew to 4.8 TVR in HSM markets (All 4+, HSM) and a national TVR of 4.1 (All 4+, All India). These are simulcast ratings of the original episode aired on Sunday morning 11 am across 9 channels (Star Plus, Star Pravah, Star Jalsha, Star World, Star Utsav, Star Vijay, Asianet, ETV Telegu and Doordarshan).

However, the trending figures elsewhere show that though the show’s success is plummeting, the retention of the audience is quite low. The search figures** hit the highest every week on Sunday; however the sharp decline speaks for itself. A blog study also revealed that maximum number of posts was published in the first 72 hours, after the show went on air. 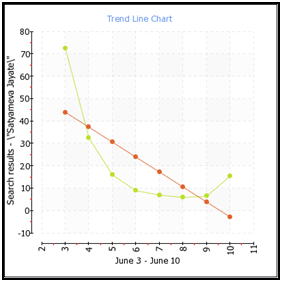 If social problems are to be addressed, it is important that such talk shows linger on more in the minds of the people. Maybe a surge of blog posts on the weekend about a past Sunday episode would make us smile that yes the impact we want is there.

*All blogs that are analysed have been picked from Indian blogosphere.