The number 13 is said to be lucky for some and unlucky for some other; however for India the number has definitely proved to be bearer of one of the strongest conversations in almost the last four decades. The 13th Indian Presidential Elections has shown the true picture of the (dis) harmony that exists within all the regional parties of India and how the voice of the masses never really matters, be it in direct or indirect voting.

The powers of the president and the process of voting for the first citizen of the nation has never been so actively discussed but for in the month of June 2012, where the blogosphere not only discussed primer papers by the Indian Election Commission, the procedure laid down by the constitution but also the powers and restrictions imposed on the judiciary. Â The trending analysis of the entire month of June shows that â€œelectionsâ€ was a well searched and well discussed term in India for a substantial amount of time. 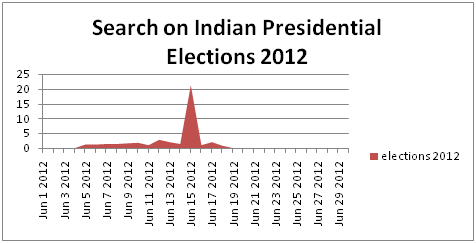 As the great Indian election drama unfolded with its candidate nominations the blog world went abuzz discussing the fate of the candidates along with their own interpretation of their fit in the role of the future President of the land. While Pranab Mukherjee’s nominations sparked debates, the blogosphere also noted that in a long time has a candidate being able to give the hint of a landslide victory by almost 70,000 votes. The ex-finance minister of the land filed his candidacy flanked by the Prime Ministers and the fore-runners of the ruling party. However, the buzz in the blog world was clearly on a different note. While 4 out of the 30 blogs we analysed wished that Mr. Mukherjee be given a fair chance, the majority of the bloggers were more amused by the thought of Mamta Banerjee losing out in the race of nominations than actually be concerned of the fit of our ex-finance minister.

It has been interesting to note that though the discussions on Mr. Kalam has been on a constant rise throughout the month of June, hardly 1% of the bloggers feel that he should come back for a second stint. In fact most of the blog world expressed their concern on his name being wrongly used when his refusal to contest elections was highlighted by the media. 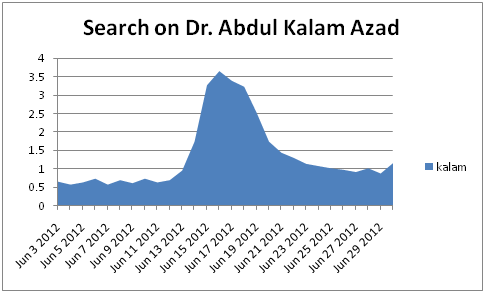 In the latest of the blog controversies debates have been sparked on the nominations filed by P.A Sangma, the leader from North East who is backed by BJP and said to be the representation of the minority groups in India. As one blogger notices in this regard:

â€œThe preamble is openly denounced when once announces that a â€˜tribal’ has never been the President of the country; hence Sangma’s application should be considered. All theories of equality and discrimination are discarded when such a statement is issued. The constitution of the quasi con federal state of India is ridiculed and the fundamentals are questioned.â€

The political drama has certainly taken over the blogosphere, it is now only a wait and watch situation to witness how the expected news of Mr. Mukherjee’s win will be handled by the bloggers. However, one thing is for sure, it is good to see Indian politics sparking active debates, hopefully the talks on line shall also have positive results off line during the next Lok Sabha elections. Till then the truth of the election drama can be said best to be summed up in the following words of a blogger: