Happy Independence Day! Doesn’t your heart swell with pride every time you see the Indian flag fluttering in the wind? Don’t you get goosebumps when you hear the National Anthem being played? This is what makes our country one of the best in the world – the way we all feel about our motherland. If you have dreams for India, tell us about them for the WOW prompt – Vision 2050 (yes we have extended the deadline till Monday midnight this time..yayy!) and get a chance to win Miami Blues sunglasses! For now, get some freedom from boredom with this week’s #PerkyTweets – the best tweets Indian Twitter users came up with this past week. 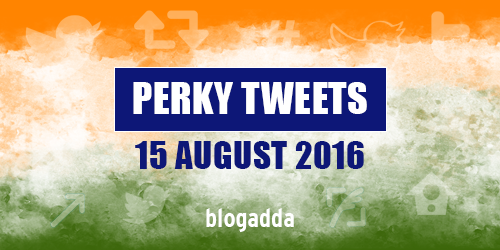 If I ask my mom to take a picture of me with my phone, it’ll be a video of me yelling”tap the screen ANYWHERE”

That long patriotic weekend again when we figure we got our independence for Liberty, Equality, and upto 50% off at Lifestyle and BigBazaar.

Wish i could take some no. of flowers from Snapchat filter for Ganpati Decoration.

Indian mothers can strike a conversation with any goddamn person in the world, even the ones who cannot talk

That’s our Independence Day edition of #PerkyTweets which covered nearly all of trending topics of the week.If you have an original tweet that you’d like to submit to us, or come across a funny tweet, tag @blogadda and #PerkyTweets or submit them to us here. You’ll get a chance to be featured here and also a chance to win cool Miami Blues sunglasses worth Rs. 2500!