*Take a deep breath*. Play ‘Yeh Raat Bheegi Bheegi‘ in one tab and get ready to explore the world of Gauri. After the awesome first part of her interview, we are here with the second part of the interview where she speaks about her experiments in kitchen, her career, her family, her take on humour and men and much much more. This is the part which everyone is waiting for and here it is. Read now! 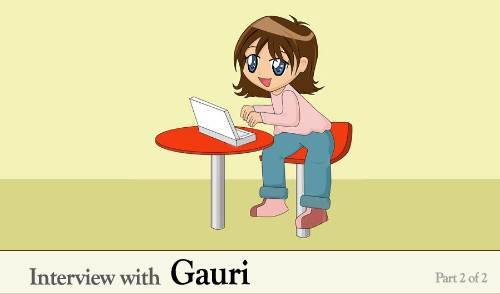 Q: Our sources say that Gauri’s experiments in kitchen are mostly successful and is a very good homemaker as well. What are the things you like about your married life? Why have you chosen to be anonymous on your blog/twitter till now?

A: That narrows your “sources” down to one person, then – my mom. Well, married life, like life, is sweet-sour. Sweet when we break our heads together over a puzzle, catch a good movie and pause every 20 minutes to build theories, indulge the kids, cook together, stay up nights listening to good music or arguing over useless abstract stuff, outdo each other at bad (and I mean terrible) jokes, or just leave each other alone.

Sour when there are places to reach on time, back-seat driving to do, the buck to be passed, important decisions to be taken (e.g. the right volume for the TV, number of days a used coffee mug should stay on the desk, etc.), “just two more minutes” to be spent online while keeping the others waiting, etc.

As to why I’m anonymous – I wouldn’t want to spend my mornings answering phone calls from “fictional” characters out of my posts. Originally, one of the real reasons was gender anonymity. We are biased towards male humor bloggers. The very same humor piece or joke often gets different reactions depending on whether it comes from a male blogger or female blogger. But somehow, that did not work. Another reason is that sometimes only one of the two can be real – either your name or your uninhibited thoughts. I wanted the latter.

Q: Nothing against women but the percentage of humour bloggers seem to be tilted towards the men. Why do you think that is the case? Do you think it is just a case of discovering hidden talent or there aren’t more women who can write humour?

A: I’m glad you brought it up. I think there are way too many factors: Among others, primal ones – as the instinct to woo is mostly male, and human males choose to do it with humor. Cultural ones, for we’re conditioned to appreciating funny only when it comes from men – because funny women have been either “improper” or “just not the same.” But real as they are, these factors are very basic and it’s time we evolved from them.

There is no dearth of women with a good sense of humor. But rather than viewing humor as a talent in itself, most women just incorporate humor in their lives and keep moving. When it comes to writing, women tend to gravitate more towards literary or emotional stuff; things that are harder to talk about but need an outlet – it’s cathartic.

Also, sadly – and this is very real – few men are receptive of humor written by women, unless it is cutesy, sexy or “girly” humor.  Most men like to think they’re extremely funny. Many feel threatened when “even a girl” can be funny, if not funnier. Strangely, men who actually are funny aren’t daunted – they’re secure about their humor, and are in fact often appreciative of women writing humor. Neither are the guys who don’t claim to be funny – they appreciate good humor from men and women alike. But these two are the extreme 15%.

It’s the half-baked I-have-to-be-better-(but-damn-she’s-good) who bear a chip on their shoulder. They have a hard time acknowledging female humorist, especially one whose humor does not give away that she’s a woman. They see her as “competition” and play subtle games (like look through her, act smug or be dismissive in general) in an attempt to bring her down – or even better, “displace” her. Unfortunately, some women fall into the trap and begin to feel discouraged, thinking they must be doing something wrong.

Once we overcome this insecure lot – which is unfortunately sizeable, but fortunately recognizable – we’d have more women in humor. All I can say to the women out there is: Write! You will come across a couple rotten eggs. It’s up to you to forgive, ignore or blog about them. But it’s really important you blog in spite of them.

[Aside: I’ve often discussed this topic with a couple ‘popular’ male humor bloggers. In fact, for the sake of a fun (and cheap) experiment, they tweeted something I wrote, or the other way round. We even predicted who will (not) RT, who will (not) ROFL etc. You’ll be surprised with the result. Let’s just say the theory holds water :D]

Q: Gauri knows close to 5 languages and is a linguist. 🙂 What are the languages that you know and which are your favorites. How did you develop this interest? Can we have your favorite phrase from each language?

A: You make it hard for someone anonymous to skirt around specific questions, but let me try 🙂 I do speak a handful of languages, but it’s still a single digit. I grew up in a cosmopolitan environment. It’s easy to pick up more than a couple languages as a child – and those stick with you if your childhood friends stick with you, if only because their moms cook terrific food.

I learned a foreign language in high school “because it was scoring,” majored in it later because the teacher was cute, taught it so I could torture teenagers, learned a couple other languages so I’d know what they spoke about me. Later, I married someone who spoke yet another language, and that made the silent treatment really easy.

My very favorite phrase in all languages put together is ‘la de la vergüenza.‘ In Spanish, it literally means “the one of shame/embarrassment.” It refers to the very last morsel of food on a shared plate – the one that is left behind because nobody wants to be the one to finish it 🙂

Q: Being a freelance translator is a very interesting job. The responsibility of using the correct words is immense. 🙂 Can we have some instances from your career where you think your translation had the potential to make/break a project. Also, share the most loved translation you have done and the one that you are yet to do it or want to do.

A: It is indeed. You get to learn about so many subjects, right from the specifics of bolts to the process of auto construction to food, medicine and psychology. The wrong word can indeed make or break a translation, skew data, and lose sums of money.

One wrongly translated term I recently came across referred to the person who administered a test. This goes back to the classic ‘give tests’ vs. ‘take tests.’ There was a set of instructions for the administrator and the subject. And the language version had translated them as “Instructions for test-taker” and “test-giver” – and in the process, reversed instructions 🙂

I find literary translations (often lyrical texts) a lot more challenging and exhilarating. One has to be mindful of so many things. Cultural nuances, sentiment, the voice of the original writer. Interestingly, the higher caliber translator you are, the less your presence/mark will be palpable in the translation. You need to be invisible; keep your ego, biases and cringes aside – because the work must look like that of the original author. Yet, it’s you who creates that near-perfect symmetry, retains sentiment to the right extent, maintains rhyme or meter (where possible), or retains a parallel idiomatic expression where possible.

I will consider myself a very good translator when I translate this Marathi poem Pruthviche Premgeet by Kusumagraj. Dad used to sing it to me to sleep when I was little. It’s the earth professing her love to the sun, but it isn’t just another “love poem.” It’s Asimov crossed with Gulzar:  geeky, geologically/astronomically sound, emotive yet humorous, metaphoric yet literal at the same time. I haven’t dared yet, because I’m not sure I’d do it justice and bring out all these elements without making it too technical, too mushy or too trite.

A: It’s personal, rather than important or unimportant. Technically, comments are a response to the post, so a response to a comment becomes a response to the response. It’s fair if a blogger chooses to respond only to a question or a counter-point in the Comments section.

I personally choose to respond to all comments. Reader comments have added indisputable value to my posts with their perspectives, opinions, insight, banter, or even criticism – and have always been a source of encouragement. There are some posts (e.g. Indian English, Expressively Challenged and Market on Drugs) where readers have contributed their own hilarious examples as an extension to the post, and there’s as much pleasure reading those comments as reading the post.

The way I see it, people could very well just read a post and walk away, but some still take the time and effort to say something nice or share the post. The least I could do is thank them for it.

I do, however refrain from thanking/acknowledging every tweet or RT individually. For one, you tend to spam time lines and two, it somehow seems like drawing attention to yourself all over again – unless it’s exactly what you’re aiming for.

A: It’s a good way to channel your creativity without having to clean up in the end. Add to it the satisfaction that someone is reading. The rest, I just mentioned in my answer to the previous question.

A: In general, Indian blogs are like Indian culture – “diverse.” 🙂

To me, a good blog is one that is grammatically sound, has clarity in thought & language, and an authentic voice. A proficient blog, in addition to all that has a distinct voice and style, evolved (not to be confused with flowery) language, and leaves the reader richer in some way. On that note, five blogs I like:

A blog is like a relationship: Easy to start, but takes love and consistent effort to maintain. Think hard why you want to get into it, and if you have a clear, convincing answer, don’t let anything get in the way.

A: Unless you refer to the money I save because I don’t need therapy because the feedback, banter and writing in general makes me happy, no.

Color: Varies. But for now, black (with a hint of turquoise).

TV Show: Not much into TV.

After the first part, tell us how many of you played the track on loop? How many of you did a rethinking on how you tweet or post on facebook? Thank you Gauri once again for this wonderful interview. Readers, let us see the grammatically sound comments which Gauri loves. 🙂 Engage her in a conversation and we will assure you that you will not be disappointed.