Gauri is the good-hearted mother goddess. In present times, Gauri is also popular as the wife of King Khan. And then there is another Gauri who lives a life of her own. She is not a Goddess nor a wife of a superstar, but is a bundle of hidden talents, that many might not know as yet. We thought we knew enough about her, but were amazed to discover so much new. There are people who think women cannot be humorous. Gauri is here to prove you all wrong. When she blogs, it creates ripples in the Indian Blogosphere.  Let us welcome Gauri aka Gau3 aka litterateuse to your Adda for a very exclusive interview. Read on… 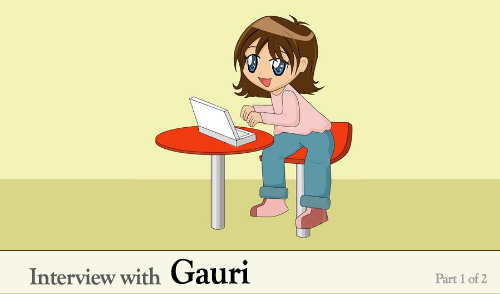 A: I started in early 2009, just to shut two people up. I used to be one of the 7 people in the world who neither owned, nor intended to start a blog – because I really had nothing to say to mankind that hadn’t been said already. I’d just read my few favorites and comment on their posts.  A few friends tried to get me to blog, but I was, in my dad’s words, “persistent” (and in the words of everyone else, pig-headed). Turns out Twisted DNA and Rambodoc – good friends, funny bloggers and now busy people – had a pigger head. Every excuse I threw at them to not blog, they’d throw back a solution. They even offered to set up WordPress and whatever basics it took to create a blog and get me started.

It’s encouraging, to say the least, when writers you look up to invest their faith in you. And so I started 42, partly because I didn’t want to disregard their judgment, partly because I was left with no convincing excuse, and mostly because it seemed like a good space to have nothing to say. I can never thank them enough.

A: I try to stick to topics that are okay to laugh about. That somewhat restricts it to life, the universe, and well, everything. I’m happy when readers take home a few laughs. Happier if they take something to think about beyond the laughs.

A: If you’ve noticed, the default status of my blog is ‘I have nothing to say. I shall update when I do.’ So rather than not writing when I’m stuck, I generally only write when there is something to be written about. So far, whatever is out there has written itself in under 20 minutes (other than the inspired music post; that involved some research).

That said, there are ample orphaned ideas dying a slow death in my drafts. I swear, they look phenomenal when they’re just ideas – but they somehow turn horrid the minute I try to give them voice. Most of the times, I realize there’s nothing in there worth 800 words that cannot be expressed in under 140 characters – and a potential blog post is often replaced by a tweet. Other times, I decide to give it time and “intend to return to them later.” Perhaps some day I actually will. 😐

A: Other than the customary tweet for the two time zones? I don’t anymore. I’m happy with my readership. Well it’s meager when compared to many other blogs, but to my mind it’s a satisfactory number by itself. And I’m always grateful to the good-hearted folks who share the link and spread the word.

A: Haha, you’ll be surprised. Well, most people I’ve come across here have evolved from the clichéd “Oh India!! I love curry and Aishwarya Rai!” or “Do you speak Hindu?” or “Do you own an elephant?” or “You don’t wear that red dot on the forehead?” or “Is Bombay in Delhi?”

There are some who will never tire of Third World jokes (all in good spirit of course), like “Oh wow, India actually has traffic lights?” where you humor them with an equally lame “Not if you take the elephant lane.” They sometimes still can’t conceal their surprise when an Indian orders beef, speaks “very good English” or is not working in IT.

But you know, I’m less likely to roll my eyes at others’ misconceptions about India(ns) here, because their knowledge is limited to what they read, see and hear – mostly from us. And I dare say they’re no less ignorant than what a majority of us would be about say Jamaica, or Kenya or even Poland.

What’s really entertaining is Indians having preconceived notions about other Indians in the US. That probably deserves a blog post for itself. In the meantime, try drawing a Venn diagram for this: “Every Indian is smarter, more non-mainstream, more assimilated, yet more aware of Indian mythology, culture and classical music than any other given Indian in the US.”

Q: Everyone loves compliments especially if one says ‘You have a regal nose’. 🙂 There are times when people compliment just for the sake of it. How do you think you can differentiate the genuineness behind the comments? What has been the best compliment that you have received in both the worlds (online and offline)?

A: 83.47% of the times, I like to give people the benefit of doubt. Most people just compliment casually (but sincerely) and get on with life. This is true of most comments too, including those put out there to get more hits on their blog, because it means someone counts on your blog to get traffic to theirs.

When someone compliments you more than a couple times, it’s likely more about them than about you. And there are all kinds. There are those who will praise effusively (and may often mean it), but the compliment is directed more towards them in the “Oh look what a sweet person I am!” sense. Some will put you on a pedestal in private but will be all smug and ubercool (at times even ignore you) in public. Then there are those who will take a quick look around to see who else is complimenting and compliment accordingly – sometimes to be on the team of cooler, popular people, other times so they don’t look like the only jerk who didn’t contribute a good word 🙂

And then there are those who will compliment (and at times admonish) you unabashed, and be willing to put their money where their mouth is; the kind that would recommend you in your absence.

There’s no denying, compliments do validate. But the way I see it, they validate what someone is to you just as much as they validate you – if not more.

Just like some of the worst insults often come as perfectly packaged compliments, the best online compliment I can remember has been in the form of a rebuke (somewhat). I still remember how stunned I was when I read this comment. It somehow drove me to write a new post within a week.

Q: Your message ‘To the Express(ive)ly Challenged‘ was the post which grabbed a lot of eyeballs. The post apart from its humour had an underlying message. In the current times especially Social Media, how important do you think is expressing yourself correctly? Can you share some examples in your own style where you think the person was expressively challenged/strong?

A: Expressing oneself correctly will never go out of style, in the times of Social Media or otherwise. Although one has to be especially mindful on the Internet since the tone is missing. It’s painful to see how many equate powerful expression to complicated, pretentious language. Yes, it’s good to know what ‘cornucopia’ and ‘pertinacious’ mean, but when it comes to clarity, straightforward words you knew before you took the GRE work much better.

But then again, it depends on whether you want to get results or appear ‘erudite.’ You tell me who is more expressively challenged? The person who says “I would indeed be very beholden, if you are so kind as to access that briny sodium chloride condiment and hand it to me”, or the one who asks “Could you please pass the salt?” ?

Q: 7 kinds of deadly twitter followers and ‘W-T-F Q Person Are You?‘ were the two posts where you characterized the people on Twitter and Facebook respectively. Every Social Platform has its advantages and disadvantages. If you were the given the option to head Twitter and Facebook for a week, what are the things that you will do and why? 🙂

A: For just a week? 🙂 I’d love to cross-wire people’s respective personas on Twitter and Facebook. It’s fashionable to bash Facebook friends on Twitter. If I could, I would design an application that would show a user’s Twitter and FB personas in two neat little columns.

Second column shows Twitter stats on how many FB friends you have made fun of (for putting up kid and vacation pictures), what kind of updates you call “lame”…

Q: ‘Está intentando dejarme embarazada!’. LOL. Whatay Faux pas. 😉 We would love to know some of the things that Gauri considers Faux pas in the current times and why? 🙂

A: Haha. Right now, the biggest faux pas I would commit is letting on what I consider a faux pas. Who knows, when I’d put my foot in my mouth (the stats aren’t in my favor) and it’d backfire? 😛

But oh wait, I can’t resist this one – you know how people, in their mission to look cool, irreverent and opinionated bash celebrities? And then the celebrity either says hello or gives some love and attention, and all that bashing magically turns into fandom o.v.e.r.n.i.g.h.t? Priceless, really!

[There, how’s that for a demo? I just made a faux-pas by saying “it’s a faux-pas to call out a faux-pas,” and then going ahead and calling it out anyway.]

Q: Avid puzzler – Anagram Nut and Daydreamer – Time Whiler. This is testing both the extremes of the brain. 🙂 This reflects on your blog as well. 🙂 What caught our eye was ‘Keyboardist and habitual whistler’. What is the kind of music that you enjoy playing on Keyboard? Which track is your favorite? Also, what is the funniest prank you have played on someone? 🙂

A: 🙂 You will have floored me if you can whistle an entire song in tune, without stopping for breath at odd times. I play just anything on the keyboard, depending on whether I want to work down stress, punch someone in the face, cry for no (or maybe some) reason or just kill time. Here’s a favorite track. Mostly because it’s the only track I’ve ever managed to record. [Some of you have heard it already; don’t bother clicking, it’s the same one :P]

Funniest prank?! (Did you really mean to ask that, or are you playing a prank on me now?) Well FWIW, I invariably play some really imbecile, incredibly juvenile prank on my friends (or husband, or sister) on the first of April. It’s almost become a tradition now; and they’re good sports. The funniest part is how they all anticipate something and “prepare themselves” every year, and get needlessly paranoid about anything I say or do that day.

Wait! This is not over yet. There is more coming up. We want you to enjoy this interview in parts. 🙂 In the next part, Gauri would be speaking about her career, her favorite Indian Blogs, her experiments in the kitchen, humour and women and so much more. Stay tuned. In the meantime, if you want to ask her anything, let us know via comments and we will try and incorporate that in the next part.