Good Morning Readers! You must be wondering what makes us all cheerful and chirpy while Monday stares right at our face blaring from the screens and loads of work! Well, we have our Twitter friends to keep us lightened and brightened through the day. You guessed it right for we are back again with #PerkyTweets swaying us away. Gear up for some giggles as we get the funniest tweets ever from last week’s Twitter parade! 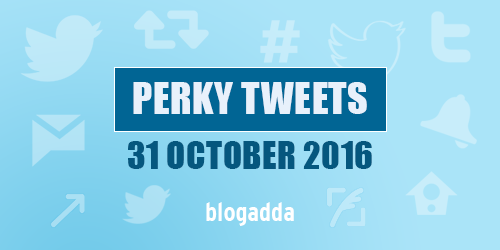 Puja decoration on vehicles blocks front and rear view. There is nothing to worry, once things are left to divine care. #PerkyTweets

Student: Photosynthesis is our topic for today.

What do you call a fish with no eyes?

Me: I am invited for a halloween party
Bro: Don't bother, you look ready to roll! #hecticlife #NoTimeForThat #dressup #perkytweets

Would you like to send us some laughter potion? Well, here’s your chance to make your tweet feature in our #PerkyTweets next week! Submit it by tagging @blogadda in your tweets with the hashtag #PerkyTweets!