They say laugh and the world laughs with you! Well, we don’t know about the world, surely Twitter laughs with BlogAddaÂ every MondayÂ as we Â get barrels ofÂ daily funny tweetsÂ with our #PerkyTweets! Surely, happiness doesn’t take more than a few characters! So for all those who are having ‘Monday’ issues, here are some giggles tweeting especially for you!
Can you make people chuckle with your tweets? Well, why leave us behind?Â Submit your tweets to us on this link! 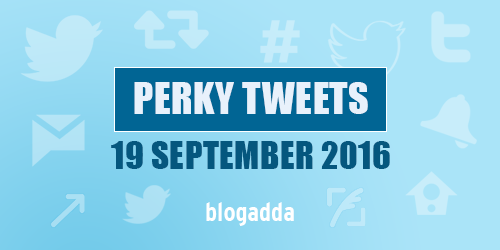 what does a ganesha's idol and an engineer have in common?

even if you drown all of them this year,more will be made next year

Even chennai expresses its feelings but she doesn't.

At a funeral…..
Me: What's the WiFi password here?
Priest: respect the dead
Me: Is that with capital "R"

her- wow, your house has a very cool feel to it
me- it's minimalist styled
h- how do you decide what's not needed
m- i don't, my salary does

Well, we had a great time rolling on the floor laughing, we hope the same for you! Do you too have a great tweet? Submit it by tagging @blogadda in your tweets with the hashtag #PerkyTweets!