In August, we had informed you about the insightful and exciting conclaves which were going to be held at XIMB this year. Well, August is over and it gives us great pleasure to tell you that all these summits were huge successes! 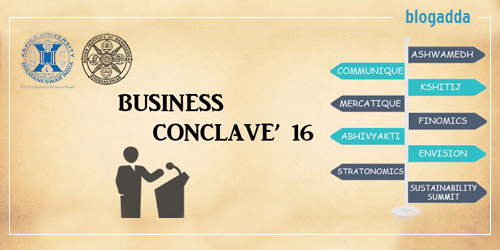 The speakers of the conclaves gave their perspectives on disruptive innovation in their respective fields. In “Envision 2016” Mr. Debasis Bal said that “Disruptive innovation is a mindset and every company is trying to build this very mindset”. Mr. Sourav Dutta stated the 3 mantras of Disruptive Innovation – continuous collaboration, differentiation and consumerization.

In “Stratonomics 2016″ in Mr. Madan Mohapatra differentiated between disruption, innovation and disruptive innovation. Mr. Suhel Bidani, said “Let’s create a world where every person has the opportunity to live a healthy and productive life”. In “Ashwamedh 2016” Mr. Manoranjan Ram said “Disruptors are innovators but not all innovators are disruptors”, he said, citing examples of how technology has revolutionized the mining sector. Mr. Rajib Kumar Jena said “Innovation is divinity in humanity. Disrupt yourself, or be ready for disruption”.

The speeches were followed by an interactive question and answer sessions with the audience.

“Kshitij 2016” was aimed at addressing the innovative practices in the field of human resource management and highlighting their significance in the sustainability of the firm’s growth and competitiveness. The speakers for the event were Mr. Satyadeep Mishra, Head of HR, Digital Services, Reliance Jio, Mr. Suresh Pugalenthi, Head, Organisation Development, HPCL and Mr, Prasad Balkundi, Associate Professor, University at Buffalo. The moderator of the event was Prof. Dr. Sasmit Patra, Associate Professor, XIMB-XUB.

All in all, the XIMB Conclaves were an enriching experience for the attendees, speakers and judges alike!