Happy Ganesh Chaturthi and Happy Teacher’s Day to the BlogAdda family! Monday has brought with it happy tidings and we hope you’re enjoying every bit of it. And to make you happier, we have for you a brand new edition of #PerkyTweets! Have fun with these hilarious tweets about current affairs to make the start of the week even more mesmerizing! 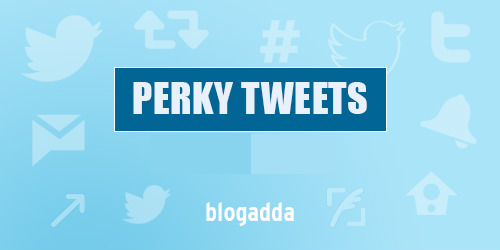 Zombae. When a ex comes back to haunt you after a dead relationship.

If you get up expecting to have a bad day, you will. Don’t be a duck. Be an eagle. Ducks quack and complain. Eagles soar above the skies

Fast and Furious movie series will keep making the series till they run out of Diesel.

Ganesh Ji is the God who also known as Vighana Harta, he converted a Monday into a Holiday this year. #Ganesh_Chaturthi

That was our brand new #PerkyTweets collection. Hope you loved reading them! Tell us which ones were your favourites in the comments section below. If you want to be a part of the #PerkyTweets fun, tag @blogadda in your tweets with the hashtag #PerkyTweets.