There are few things that are as pleasing and as ego boosting as making people laugh. People who make others laugh are looked upon as being desirable and positive, and who doesn’t want to be both these things, right? Here are this week’s best tweets that made us laugh or snort through our noses at least, in the latest edition of #PerkyTweets. Let us know which ones struck you as the funniest so we know what you like! 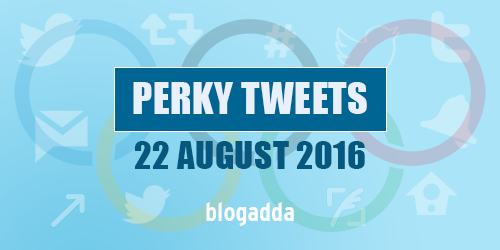 Q: Who was the savior in the movie Mohen-jo-daro?
A: Interval #Perkytweets #CelebrateBlogging @blogadda

13 Years of Emraan Hashmi and 8 Years of Bachna Ae Hasino trending together, I guess I needn’t say more #PerkyTweets @blogadda

If Andy Murray marry with Sana,
.
She Becomes Sanam re 😂😂😂

#PerkyTweets #devilThought
If u see a flash mob join it to make it feel like they didnt practice enough. @blogadda #CelebrateBlogging

@blogadda #MiamiBlues #PerkyTweets
I get numerous chances to become a millionaire daily. All I have to do is open my ‘Spam’ folder.

Justin Trudeau is celebrating Indian Independence Day!He is so great!

Look at the bright side. Ten years from now, you might be failing miserably at life, but at least you won’t he the kid who got Harambe shot.

Worst part about being married is being in two family whatsapp groups.

Hope this chuckle-worthy post was an enjoyable ride for you. Have you tweeted something funny recently or come across a funny tweet? Tag @blogadda and #PerkyTweets or submit them to us here. You’ll get a chance to be featured here and also a chance to win cool Miami Blues sunglasses worth Rs. 2500!