Our Premium Blogger has gone ‘ga ga’ over  Wheel of Time, a series of epic fantasy novels written by American author Robert Jordan. It is a well written, superb review by Samit Malkani. The characters and events come out very lively through this post. Don’t miss it, as the writer gives you chance to fall in love the novel. Read on. 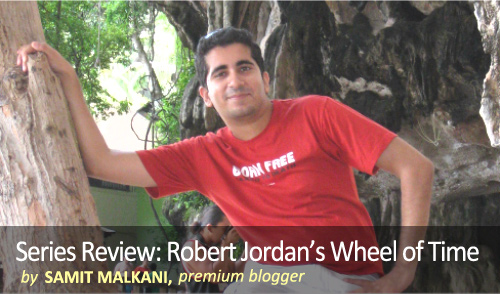 The period leading up to the release of the final book of a series seems like an odd time to be writing a series review.

But, there’s no better time than now to start (speed) reading Robert Jordan’s Wheel of Time series – probably the greatest fantasy saga of all time.

The Wheel of Time (commonly abbreviated to WOT) saga spans two decades, fourteen novels, one prequel and two authors. Kicked off by Robert Jordan in 1990, it has been taken up after his death by Brandon Sanderson (author of the Mistborn series). Guided by the detailed notes Jordan compiled as proof against his imminent demise, Sanderson will be releasing the final book – A Memory of Light – on 8th January 2013. (Which just happens to make a brilliant birthday gift for me.)

WOT is based on the Hindu-Buddhist philosophy that time isn’t linear, but cyclical. It strings together the Creation myth found in Western theology, the concepts of balance and duality and the respect for nature espoused by Daoism. A fine blend of history, myth, legend, religion and philosophy.

The series is set in the far future or the forgotten past – of our own Earth. It is an Age of struggle, for humanity is yet recovering from the war that ended the Age of Legends three-and-a-half thousand years before. That war was merely one more skirmish between Good and Evil – the Light and the Dark – but destructive enough to kill off most of humanity, reshape the world and end an utopian Age in human history.

That war was called the War of Power, for it was fought using the twin forces of saidin and saidar, the male and female halves respectively of the One Power, the driving force of the universe. Men and women who could wield the One Power were called channelers, and there were plenty of those on both sides.

The war was won by the Light, but at a terrible cost. Lews Therin Telamon, known as the Dragon, the leader of the forces of the Light, sealed the Dark One – Shai’tan – and his thirteen followers into a deep prison. But Shai’tan’s last counterstroke tainted saidin and drove the Dragon and all male channelers mad. These madmen then destroyed themselves – and the world – with blasts of saidin.

Now, millennia later, the Wheel of Time has turned, and the Dark One is close to breaking the shackles that bind him. A young farmhand named Rand Al’Thor discovers that he is the reincarnation of the Dragon, and that he and his best friends – Perrin Aybara and Mat Cauthon – must unite the world and lead the forces of the Light against the growing power of the Shadow.

The fourteen – well, thirteen – books chart the course of the Dragon Reborn as he works to unite the world and fend off the thirteen Forsaken before Tarmon Gai’don, the Last Battle. And it isn’t as easy as it seems, for Rand must follow a prophecy that suggests that the Last Battle will rain death and destruction upon the world, giving mankind no reason to unite behind him.

The series is complex and more far-ranging than any I have ever read, including George R. R. Martin’s Game of Thrones. Each of the key characters is explored and developed fully, and each of them commands their own major plot lines. Apart from these, a hundred different subplots develop around hundreds of minor characters, weaving seamlessly in and out of the main storyline, presumably to be tied up in one big, crystal-clear knot at the end of Book 14.

The character development is flawless. Take Rand for instance. He spends much of the series trying to convince the world and himself that he is indeed the Dragon Reborn. Even after he has accepted his fate, he shows a grim reluctance to do his duty. He makes mistakes, losing lives, friends and even his hand in the process. Believing he that he needs to be strong to win at Tarmon Gai’don, he tries to become like iron, and verges on becoming as harsh as the Dark One himself. At the same time, he falls in love with three women, and works to build schools that can survive the Final Battle and help humanity rebuild. He isn’t your typical hero, who turns noble and invincible upon realising his destiny. Rather, he is a real person, torn and confused, maturing over time to become the true Dragon Reborn in Book 13.

The same realistic, grim treatment has been applied to every other major character in the series. Making most characters people you can identify with – flawed, emotional, essentially human.

What can I say about the writing except that it is inspirational? Jordan’s style is pure poetry, painting Tolkienesque pictures in his readers’ minds. But these are not the beautiful, verdant landscapes that set the scene for Frodo Baggins’ adventures. These are harsh lands and harsh times, the people driven to despair and struggling for survival, while kings and queens fabricate Machiavellian plots, all the while besieged by an evil designed to give readers nightmares. The contrast between Tolkien’s and Jordan’s worlds is the contrast between Star Trek’s gleaming, futuristic universe and Star Wars’ grubby, “used universe”.

Wisely, Brandon Sanderson, author of the final three books, has chosen not to imitate Jordan’s style, but has forged one of his own. His writing is visual, yet more action-oriented. In that sense he is fortunate – the pace picks up dramatically in the final three books, with plenty of set-piece battles and loads of heroism.

My biggest and geekiest joy in these books comes from picking out the history and myth of our times that Jordan has deftly seeded into his world. From Gautam Buddha – “Ghoetam, under the Tree of Life” – to a Cold War between America and Russia, from the resemblance between Perrin and Thor to the name of the Final Battle being derived from the word ‘armageddon’, Jordan has incorporated bits and pieces from Asian and European myth into his magnum opus. He does it beautifully, adding a deeper meaning, philosophy and thereby, re-readability, to his world.

I’ve always judged books by their covers, and they are stunning. One printing has stark black covers, with the snake-and-wheel motif adorning it. The other – the original – has simplistic, almost Victorian illustrations. They have an old-world charm to them, and draw you into the book at first sight.

So what can we expect from the fourteenth and final book – A Memory of Light?

To paraphrase Bane from TDKR: “Secrets will be revealed. Loose ends will be tied up. Prophecies will be fulfilled. Justice will be done.”

(You read that in Bane’s voice, didn’t you?)

Will Rand have to sacrifice his life? Will he unite the Asha’aman and Aes Sedai – the male and female channelers – for the final strike against the Dark One? How will he seal Shai’tan back into his prison? Who lives and who dies? And what will happen to the world in the aftermath of Tarmon Gai’don?

If I have piqued your curiosity enough, here’s the complete listing of the WOT books. You can find them at any bookstore and on Flipkart.

The prequel, ideally to be read after you’ve gone through Book 10, is called A New Spring.

If you are a fantasy buff, this saga – and it is truly a saga – is a must-read.

If you try it after reading this review, and fall in love with it like I have, be nice and gift me Book 14 on my birthday, won’t you?