Let us go back to the year 2000 and read some headlines with a twist. ‘Onida launches gaming console with motion sensing abilities’,’Brilliant Tutorials admits to having influence over IIT examiners’.’Osama Bin Laden proposes his love for Mamta Kulkarni through an audio tape released by Al Jazeera’. These would have been some of the headlines which we would have loved to read in that year.

This man needs no introduction as he is the king of Satire humour. He is one of the founders of Bosey.com and started his own blog, Son of Bosey in 2005. He is among the regular writers for Yahoo, Cricinfo and a few other websites besides part of 5 blogs. 🙂 Time to invite Anand Ramachandran aka @bigfatphoenix to our adda for a fun interview. 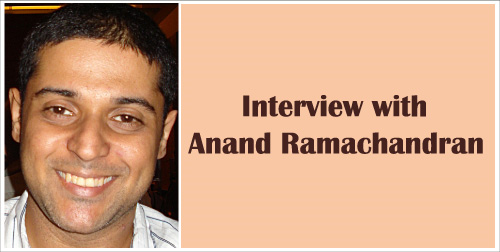 A: I started blogging at Son of Bosey in 2005. However, we actually started our satire site bosey.com in 2000 – way before blogging itself was mainstream. Why? We were great fans of MAD magazine,and later on, The Onion. So when the web presented us with an opportunity to create and publish our own material, we jumped at it. It helped that we were one of India’s earliest web design studios – so we had the knowhow, even way back then.

A: Mainly satire – in the ‘fake news’ format on Son of Bosey and in a more freestyle format on Pwnage of India. I also regularly blog about videogames, and sometimes about comics.

But seriously – my regular columns now take priority over blogging in terms of writing mindspace. So I really only blog whenever the mood takes me. Or if a really interesting idea comes up.

A: Not really. Other than the mandatory link on Twitter and Facebook. I find that, with social media working the way it does, creating good stuff is the best promotion. Write stuff that people like, and they’ll promote it for you.

Q: ‘Son of Bosey’ is how it all started. Tell us more about your blog(s) and how did you zero down on this name?

A: Actually it isn’t. It all started with the original ‘Bosey.com’ which a bunch of us (including @evilemperorzeb, @abithaanandh @druckb, @eenees, @onejubb and others) started in 2000. I won’t bore you with the origin story, but I will tell you that it involved a pigeon, a ventilator in Bangalore, and some medicinal herbs. ‘Son of Bosey’ was merely the revival of the original Bosey in blog form, after a mild hiatus. The name? It’s what the Aussies call the Googly. The one that surprises you.

Q: ‘@bigfatphoenix’ is now a trademark handle associated with humour, hashtags and more in the Indian Twitter Diaspora. Do people know you more now as @bigfatphoenix than Anand Ramachandran? Why not a handle with your name?

A:That’s not true – I write under my real name on Cricinfo and Yahoo!, which get far more eyeballs than anything I blog or tweet. Big Fat Phoenix is just the name of my one-time creative studio.

Q: ‘Son of Bosey’ was one of the earliest blogs in India focusing on Satire and humor. So many people have enjoyed your style of humour and we have newer blogs that focus on similar genre. What is your secret of success and advise to other bloggers in the same space?

A: The only thing I have to offer is this:

Write stuff that YOU enjoy reading. Start writing for an audience, trying to second-guess their tastes, and you’re likely doomed. Also, if you’re writing satire or humour, make sure you get a drink and a barrel of laughs with your friends every day.

Q: You are a part of many multi author blogs which focus on humor and you also write regularly on cricket. You also run a company – How do you get the time to do so much? 🙂 What is that one thing Anand would like to continue for a long time?

A: I run a company? I never got that memo.

Q: A few people mistook you for FIP. How did the Fake IPL player controversy affect you? What were the learnings from that episode?

A: You could hardly call it an episode. It was just random speculation, and didn’t affect me at all. There was a little concern from my company, because we were doing some work for KKR at the time, but no big deal.

Q: Let us know explore the gaming side of Anand. What kind of trends are you seeing in the Indian Gaming Industry?

A: Wow. You’re asking me to write a business column now? India is the largest untapped gaming market in the world, by far. So it’s only a matter of when, and not if, it will explode.

Q: Why are more games being released exclusively for consoles than PC? Do you see the trend continuing in the near future? Why?

A: Because consoles offer a relatively piracy-free, user-friendly gaming experience when compared to PCs. Publishers make more money from console platforms than from the PC platform. In terms of large ‘boxed’ games, it will continue to be like this for the foreseeable future. But the PC is still a strong gaming platform, thanks to digital distribution services like Steam, social gaming on platforms like Facebook, and browser based games, which are still hugely popular.

Q: What kind of games do you prefer to play and why? Which games are your all time favourite?

A: I play and enjoy all sorts of games – from casual puzzlers and arcade games to hardcore shooters,strategy and role-playing games. There isn’t a kind of game – large or small – that I don’t enjoy.

Q: Kids start playing console games from their early years of life. As a responsible dad, what do you recommend to parents of kids playing games like GTA, Deadspace and Left for dead?

A: Letting your kids play age-inappropriate videogames is the same as letting them watch age-inappropriate movies or TV shows. I’m not getting into a moral or ethical argument here, but if you let your kids play these games, at least know that they’re accessing content that’s not meant for them. There’s always an age rating on the box. Oh – and I’m no responsible dad. That’s way to uncool to admit.

Q: Share with us 5 games that you are anxiously waiting to play in the months to come.

A: I respond to all the comments on my blog, but not to all on Cricinfo or Yahoo!. I think a blog is a slightly more personal space, where it is indeed important to interact with the community of readers. It’s worked wonders for me in terms of understanding and establishing a relationship with the people who read my stuff, which makes me a better writer, hopefully.

A: To me, it’s the constantly amazing realization that there are actually people out there who take the trouble to read the rubbish I write, and actually enjoy it.

A: The quality of writing on Indian blogs is mostly superb. There are so many blogs out there with top-notch writing, that it’s impossible to keep track of all of them. And this is true not only of English language blogs, but the ones in Indian languages as well.

I always hesitate at this ‘favourite blogs’ business. I’m honoured that many rock-star bloggers have named my blog among their favourite reads, but I’m going to approach this a little differently (I read all the star bloggers – Ramesh Srivats, Krish Ashok, Sahil Rizwan, Narendra Shenoy, Prem Panicker, Amit Varma, Fakingnews – and count many among them as good friends.) But I’d rather turn the spotlight here on some superb bloggers who don’t get mentioned here very often, if that’s all right with you guys.

A: Don’t swallow key chains. It’s bad for you. Also, never show up at a darkspawn wedding carrying a small duck.

Q: Let’s conclude off with a few favourites.

Color: Black. Although technically, this is absence of colour, in the additive model. So, okay, purple.

Book: The user manual of any Chinese-made product

Nandri for the wonderful interview. Hope your evil twin is reading this as well. 🙂 We thoroughly enjoyed doing this interview and we are sure our readers enjoyed it too. Readers, shoot in your questions.

5 Replies to “Interview with Anand Ramachandran”