In his own words ‘Krish Ashok is an anti-social, music loving philistine who is doing Jalsa, showing Jilpa, enjoying Gilma, thinking about matter’. Krish Ashok is an IT consultant whose hobbies are blogging, music and technology. He is the capacious mind behind Doing Jalsa And Showing Jilpa – one of the most popular blogs in the Indian Blogosphere.Â  Get ready to laugh uproariously as you enter the world of Jalsa and Jilpa. 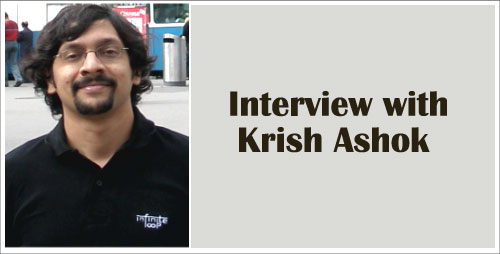 A: I originally started blogging when I had this irrational itch to spread rationality around the world. So I started blogging about the irrationality of religion. But rather irrationally, I chose the wrong blogging platform, which then resulted in absolutely zero audience for what I had to say. Although, if I had to be rational, I should really be blaming the quality of my writing instead of the blogging tool. But I believe it takes some amount of irrationality to spread rationality. As the legendary Dr House once said – “If one could reason with religious people, there would be no religious people”.

But pretty soon I realized that I was not really cut out to be a shining beacon of reason in an ocean of blind faith. So I gave up blogging for about 3 years, and restarted in 2007 when something profound happened in my life. I lost my wallet and the catharsis of blogging about it made me feel one with the universe. Or something like that. But this time around, I decided to give up fundaas and instead test the blogosphere’s limit of tolerance on unbridled nonsense, and thus was born “Doing Jalsa and Showing Jilpa”, a creative exposition of ignorance, triviality and all those things.

A: As you can see from the list of categories on my blog, the most popular topics are Jalsa, which means “Illicit gratification of the matter kind”, Jilpa, which means “Gratuitous holding forth on topics that I know nothing about” and Gilma, which refers to all things odd, quirky and mildly squalid.

A: It’s hard to get stuck when the primary aim of the blog is to make little or no sense, so the answer is no. Once in a while, I do fall for the temptation of trying to sound all serious and offended and end up writing something totally pompous and misinformed, but then I console myself by laughing at all the interesting comments that come in, especially the angry ones.

A: Promotional techniques of the shameless kind tend to work extremely well. In the early days of my blog, I initiated a mutual back-scratching process with many bloggers, which eventually resulted in a small but loyal readership. Eventually, Desipundit helped as well, bringing in traffic for the posts they believed were well Desipunditworthy. But beyond that, I don’t indulge in any overt promotional activities.

A: No. I don’t earn any direct revenue. But my blog has had interesting side effects. The New Indian Express felt that I was worthy enough of a column on their Saturday supplement after reading my blog and I also landed a gig at a local radio station (Chennai Live 104.8) where I do a weekly show on the subject of the internet. So I suppose that, in a way, one could say that my blog does earn me some revenue in an indirect way.

A: In the early days, every comment was precious. It was, in a sense, an implicit invitation to check out the commenter’s blog. So there was a lot of “Hey I like your blog. I’ve added you to my blogroll” kind of thing going on. But eventually, I did retain my habit of responding to almost all comments, except the plainly adulatory ones because for each one of those, I have to go find 2 numbers elderly ladies to do some de-boorinazarification so that takes up a lot of my time, so I dont bother responding to those.

A: I use an Apple Macbook Pro. I’ve never needed any special tools because my Mac makes me drool and inspires me to creativity and constant Apple fanboyism that is the scourge of the web nowadays. When I had the misfortune of using Windows in the past, I used Windows Live Writer to remind myself of the fact that Microsoft does write good software once in a while. And with WordPress.com, I’m not sure one really needs anything extra.

A: I think there’s way too much variety to make any sort of meaningful. There are several excellent blogs and an equal number of um, blogs of the non-excellent kind. My favourite 5 in no particular order would be:

A: The daily wonder of finding out that there are people who read my blog regularly.

Q ‘Hindi Song Lyrics’. It is a unique post with the unusual use of graphs. How did something like this come to your mind?

A: As an idea, it’s not original. As I state in the post, Graphjam is filled with funny statistical representations of pop culture. So I guess the “originality” of my idea is in “desifying” it. I can now understand how Anu Malik feels. After all, he is being original with his idea of adapting Deep Purple (and others) for an Indian audience.

Q: The ‘Plog’Â  is again a very interesting feature of your blog. Our readers would love to know more about it

A: Since I used to do a lot of visuals on my blog, I thought it might be interesting to collect all of the popular ones in a single place. That’s what the Plog is. Plog is also, as some astute readers might realize, a questionable pun on the word “Blog”.

Q: June 2007 was special as we saw KrishAshok submitting a new post almost every single day.Â  Sirjee how come this sudden spurt in blogging? Any particular reason?

A: I was promoted at work and therefore obviously found myself with no actual work to do. So that explains the spurt. Once they realized what I was doing, the empire struck back and shifted me to another part of the company, where I actually enjoy working, so that’s why my blogging frequency has settled down to one post per week.

Q: What does Chennai as a city mean to you?

A: It’s where I do Jalsa, show Jilpa, enjoy Gilma, think about matter and Vuttufy peter.

Q: What is one thing in your life which you always wanted to do, but have not yet done ?

A: I would like to, before I am cryogenically frozen for posterity, dress up as Issac Newton, go up into space, and sit under a plastic apple tree and have a real apple not fall on my head because heh, it’s zero gravity and then wonder about the sweet irony of it all.

A: I generally don’t like advising anybody. I prefer the extremes ofÂ  “subtle hints” or on the other end, the “Do-what-I-say-or-I-will-tickle-your-feet-with-Ostrich-feathers” kinds of persuasion. On the other hand, I could have just said – “Go to wordpress.com, sign up and start blogging”. If you get bored, blog about getting bored. If you get bored about blogging about getting bored, you could of course, go around tickling people in their feet with Ostrich feathers, shoot videos of them, upload them to Youtube, and then write a blog post about that experience. Seriously, there are no reasons not to blog.

Thanks a lot Krish for the Interview. We are sure our readers would have loved your wit and humor.

Readers you can connect with Krish Ashok through: