A lot of us love to read fiction. How about a story that has bravery, friendship, revenge and humour, set in a fantasy world?

Age of Azmoq: The Valantian Imperium by Rajamayyoor Sharma is a new epic fantasy series, centered in a world where everyone is struggling to control Azmoq, the divine metal. If you love reading such stories, don’t miss this one! 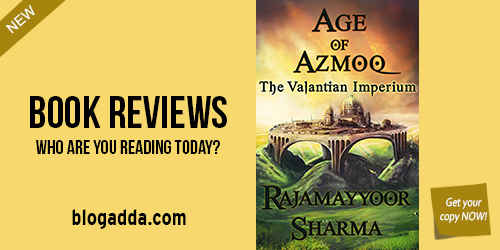 We have 10 copies (Pages: 392), available for the members of the Book Review Program. Apply Immediately if you are interested!

Overview of the book

Azmoq is the rarest and most coveted metal on the planet. It’s the ultimate source and symbol of real power, and the Valantian Imperium controls it all in Valantia.

Or so they thought…

For the first time in generations, the Valantian Imperium, masters of the Valantian continent have glimpsed the first tremors of fear. There are rumors abound. Rumors of legends. Legends of both ancient Azmoqian weapons and men of godly powers, long thought to be myths.

As these rumors grow, a small group of people, from various walks of life, some commoners, some within the mighty Valantian Imperium itself, by pure coincidence, have set in motion a chain of events. The legends, if true, along with these set of events, might reignite the flames of a revolution. A revolution the Imperium had long suppressed. A revolution that might alter the balance of power in the continent, and eventually the entire world…

Rajamayyoor Sharma is the author of the Age of Azmoq series. While he wrote short stories (primarily for his own pleasure) during his college days, he never thought he would write a book until this story had taken root in his mind. He had the idea for the series for years, but never found the time to pen it down. He finally decided to take some time off in 2017 and write the first book of the series: The Valantian Imperium.

During the day, he is a management consultant. He has a degree in engineering from BITS Pilani and an MBA from IIM Bangalore in India. He currently lives in Bangalore with his wife, son and parents. He loves to spend his spare time reading anything with a story, watching movies with his wife and playing with his son.

The review should be of 500 words or more and should be posted on your blog within 7 days from the day you receive the book. In your review, tell us about the story, the writing style of the author, your likes, dislikes, expectations, takeaways and more.

To be able to review this book, you need to be a registered member of BlogAdda and your blog should be approved by BlogAdda. You should also have signed up for the Book Review Program. If you have already signed up, then head over to let us know your interest in reviewing this book.

NOTE: Even if you have signed up for the book reviews program, you need to individually apply for reviewing every book that you are interested in.

One Reply to “Book Review: Age of Azmoq: The Valantian Imperium”