Hello bloggers! At the start of every week, we bring to you #PerkyTweets to make your Monday a little less agonising after the lovely weekend you just had!  Here are some of the funny tweets doing the rounds this week. 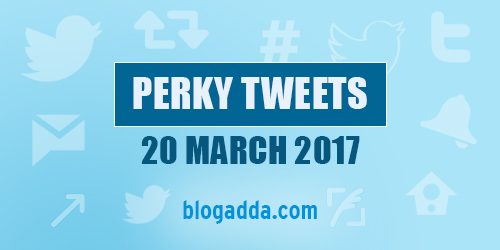 Kohli is so aggressive. If he ever becomes the defence minister of India, Pakistan will be a part of J&K and China will be Arunachal Pradesh

Name Place Animal Things taught me more about animals and geography than school ever did.

Spoke with a girl called Christine today. SO wanted to ask her why she robbed Saif in Goa.

My mom when I fill water bottle and put into the fridge after drinking water. pic.twitter.com/e6POZmbv6C

family's reaction when u announce "i m leaving the job" pic.twitter.com/GD1VgcOzJv

There would be a doolally nearby.

I'm just saying, would @HillaryClinton adopting the nickname "Killary" to become a vigilante superhero be the worst thing?

Came across a funny tweet you would like to share with us? Or have your tweet feature in our #PerkyTweets next week? Submit it by tagging @blogadda in your tweets with the hashtag #PerkyTweets!