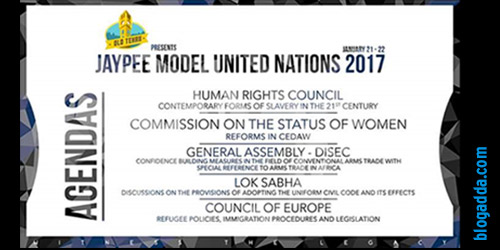 Model United Nations, also known asÂ Model UNÂ orÂ MUN, is an educationalÂ simulation or academic competition in which students can learn aboutÂ diplomacy,Â international relations, and theÂ United Nations. InvolvingÂ researching,Â public speaking,Â debating, and writing skills, in addition toÂ critical thinking, teamwork, and leadership abilities, this makes it a perfect platform to speak, influence and change lives. As fascinating it is sounding by this one single definition, there is a lot more to grasp from an event like this.

When we talk about MUNs in India, the whole network of people is segregated geographically but united by the essence of diplomacy. Jaypee Model United Nations (JMUN) is one such MUN conference of the northern India which is bracketed within the topmost conferences of the Delhi-NCR region. It claims to have hosted over 3000 delegates from different parts of the country in the past 6 years and has created a benchmark that is tough to match. Continuing the legacy, JMUN is all set for its seventh edition to be hosted on 21st and 22nd January at JIIT, Noida under the Secretary General Mr. Akhil Puri.

JMUN is glad to have partnered with BlogAdda. What sets JMUN apart from all the other conferences in India is it’s Intellectual judging panel, sumptuous learning, amiable organizing committee, delicious food and most importantly fecund and fruitful discussion and debate.

Talking about discussion and debates, let’s take a look at the amazing committees with their thought-provoking agendas that we came up with, for this edition of the JMUN.

Commission on the Status of Women: with it’s agenda â€œREFORMS IN CEDAWâ€ the committee offers a chance for deliberations on some of the most thought provoking issues that the women face in this century. The committee is dedicated to the promotion of gender equality and the empowerment ofÂ women.

United Nations Human Rights Council: With the agenda â€œContemporary Forms of Slavery in the 21st Centuryâ€ we endeavor to make our delegates give a thought on the social injustice inflicted upon a multitude of our fellow humans in the 21 st century. This particular committee isÂ responsible for strengthening the promotion and protection of human rights around the globe and for addressing situations of human rights violations and make recommendations on them.

General Assembly-DISEC: â€œConfidence building measures in the field of conventional arms trade with special reference to arms trade in Africaâ€ is the agenda of this committee which is the main deliberative, policymaking and representative organ of theÂ UN. Its powers are to oversee the budget of the United Nations, appoint the non-permanent members to theÂ Security Council, receive reports from other parts of the United Nations and make recommendations in the form ofÂ General Assembly Resolutions.

Council of Europe: â€œRefugee policies, immigration procedures and legislationâ€ is the agenda of the committee focused on promoting human rights, democracy and the rule of law in Europe.

Lok Sabha: Lok Sabha , composed of representative of the people chosen by direct election on the basis of adult suffrage is the Indian committee which never fails to witness ferocious debates full of rhetorics. This time around the agenda of this committee is â€œDiscussion on the provisions of adopting the uniform civil code and it’s effectsâ€ .

The launch of JMUN’17 on 15 th November, 2016, inaugurated by Mr. Kunal Arora, Founder of The Education Tree, was attended by more than 400 students and that day marked the opening of applications for the conference.

With â€œBELIEVEâ€ as our official theme for this edition of the JMUN we wish to send out the message to all of you out there that â€œ a small BELIEF is enough to build a legacyâ€. The Organizing Committee of the conference believes that every person is special and if everyone starts believing in themselves then they can do wonders. In this world full of cynicism, believe is all one needs to have in oneself , no matter what . This belief of the Organizing Committee of JMUN’17 is setting them apart from all the other events.

JMUN’17 aims at making its delegates â€œglobally awareâ€ about the contemporary issues and will ultimately give them a platform to develop and showcase their Leadership skills in the most exciting way possible.