Good morning peeps! Christmas just left us astound with its immense love, joy and peace. We are sure you had fun filled festive weekend. Now its time you add more fun and craziness to another week’s start. We bring to you some of the funniest tweets of this week to make you chuckle all day. Are you ready to laugh out louder with #PerkyTweets dose? Then get ready and read these best tweets from our twitteratis! 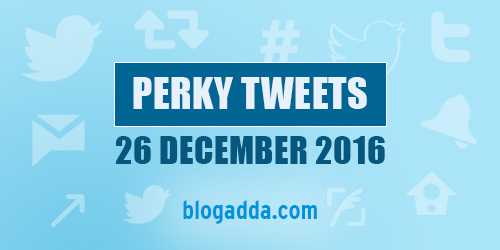 @blogadda #PerkyTweets Why did Najeeb run away from his "Jung"? Because "Taimur" has arrived !!

I'm the kind of person who'll pay full price of pizza even after 30 mins. 🙈 😂 #PerkyTweet @blogadda

Guests at home & your almost 3 screams 'Oh F***' for the first time!! have never been so ashamed and worried EVER!!#Perkytweets @blogadda

I always wonder if kursi ki 'peti' is accurate for seat belt, or if it was a typo for kursi ki patti that never got corrected.

@blogadda #PerkyTweets There are 3 types of people in the world-

Do not surrender to your past and be what it made you.. Farida #IQuote #PerkyTweets

In other news, Ram Mandir is built. I see it everyday between Jogeshwari & Goregoan station. I don't need an idol to pray now! #perkytweets pic.twitter.com/S81VvWRQCd