Good morning amigos! Still wish to laugh and continue the weekend fun and frolic even on Monday? Then here’s this salver we bring to you full of funny tweets to make you chuckle. Enthrall with some good laughter the entire day and forget the Monday blues. Pick up your laptop or cell phone and slide through these funny liners called #PerkyTweets of this week. Our twitter pals never leave a chance to get a big curve on our lips. Take a look! 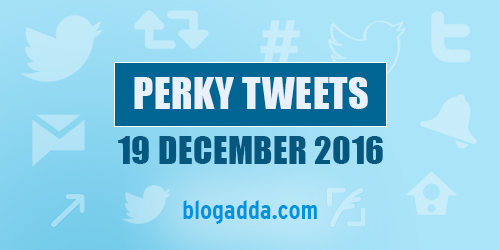 Guests at home & your almost 3 screams 'Oh F***' for the first time!! have never been so ashamed and worried EVER!!#Perkytweets @blogadda

#relationships are like #hashtags, trending for some, annoying for others.
It's the wrong one that puts you in a spot!#perkytweets

Q: How to Make Sikh jokes, in spite of SC judgement against it, during Christmas?
Ans: SC left an exception with Santa Clause! #PerkyTweets

Its funny how movies teaches us not to smoke while showing how to smoke through their movie characters! #PerkyTweets @blogadda

@blogadda More countries to join DeMonetization-
This is Modi's Conspiracy, now where will we keep our hardearned money-MWati#PerkyTweets

Moms all over are doing amazing creative stuff with their toddlers. And here I am happy that I survived the day. Yay @blogadda #perkytweets

ED seizes Rs 30 lakh and 2.5 kg gold from a tailor in Mohali.ED will perform 'Kaant-Chaant' of his financial records #PerkyTweets @blogadda