Hello beautiful people, Monday is a sign to get back at your desks and fulfill your work obligations and set the scale of tasks for the entire week. To charge you up and enlighten your busy day, we bring to you best funny tweets of the week from our twitter sphere. Laugh and wrap up your work with these hilarious #PerkyTweets of the day. Put on your laughter gear and get going for some chirpy and fun filled ride! 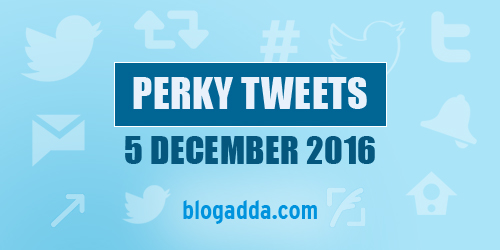 @blogadda The 1000/- and 500/- will be back in circulation. Confirmed news as appeared in newspaper.👇😂#PerkyTweets pic.twitter.com/ODfMuMYLOX

Time wasted in ATM queue today – 1 hour. Under a blazing hot afternoon sun. The govt owes me not just time =money but aspirin and sunscreen

You know your life is screwed when Justin Bieber songs start to make sense.

Anybody else wants to waste my time in 2016. Still 31 days left #perkytweets @blogadda

@blogadda #PerkyTweetsI walk in2 a bookstore & ask the sales lady for the self-help section.She says "if I told u, it'd defeat the purpose."

When d pediatrician said "this one's a unique breed", hope he meant it for the pup #toddlerlife #parenting #perkytweets

People say "The way to a Man's heart is through his stomach". I bet those people never met foodie girls. 😏🍝🍔🍗🍟🍕🎂🍻😍 #PerkyTweets @blogadda

Visit our Perky Tweets parade on YouTube as well!