Hello Monday! We are back again with our hilarious round of laughter and all things perky with #PerkyTweets! As usual Twitter has always been a pool of fun and masti, and BlogAdda makes it a point to kickstart the week on a happy note with the India’s funniest tweets ever. While this Monday seems a lil less painful (yes, good wins over the bad tomorrow!) and we are all set for a quick break tomorrow, here’s some giggly jokes and chuckling tweets to keep you hail and healthy through the day! 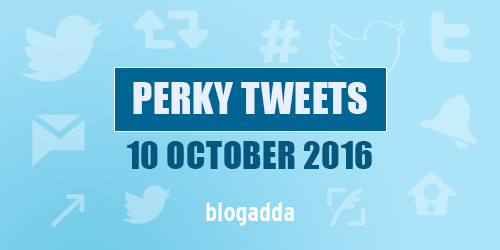 #PerkyTweets "Delhi CM condemned RaGa's statement"
OMG, his conscience's speed is faster than The Flash. Is he in d Next DC movie?

@blogadda In the coming future, samsung galaxy note 7 would be counted as an IED and might be the 1st choice for terrorists.#perkytweets

Dad: U didnt like my pic on fb
Me: My a/c is deactivated
Dad: Why
Me: Bored
Dad: *rolling eyes* Grow up boring girl! 😷😳😕#PerkyTweets

Would you like to send us in a laughing fit? Well, here’s your chance to make your tweet feature in our #PerkyTweets next week! Submit it by tagging @blogadda in your tweets with the hashtag #PerkyTweets!