Buzzing Blogosphere is back for another week with the topics, themes and issues that made waves in the past few days. This week’s main theme revolves around 50% of the population, that’s right, women. All women ask for is to be treated like equals, as humans, yet in reality they are treated as second class citizens of the world, always less important than the men. The news this week reflects this stance, which for some reason our world and society decides to take. While, many say this is a women’s problem, the truth of the matter is that it should be a global problem. A problem that we as a blogging community will not rest until we shine a glaring light on it. 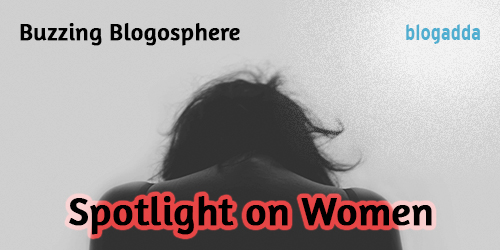 It is no news that women’s rights are restricted in our society and culture. However, women used to accept the way things are, and were made afraid to rock the boat. That is no longer the case as now women are fighting for their rights, and are actually causing tidal waves to bring about the change they had only previously wished for. As Mithilesh points out.

This is one such case where women demanded change. While both men and women are allowed to visit Haji Ali, what most people did not realize is that women were not allowed to enter the inner sanctum of the mosque. The dargah trust claims that according to the Quran, women are not allowed to be in close proximity to the dargah of a male saint. This is not the first time that people have used religion to limit the rights of women.  TheMuslimIssue points out this inequality even in worship.

“A religion by men, for men and rewarded for men only. Shouldn’t that be suspect? If ‘God’ hated women and creation so much, why would he create them in the first place? And why are women branded the ‘lowest of creatures’, when women give birth to the assumed loftier gender, men, and a prophet who demeaned and oppressed the very body that gave him life? If Muslim women refuse to give birth to male children and aborted them, the men of Islam would soon discover who has the real power.”

However, there may be cause for rejoice, as the Bombay High Court has ruled that the dargah cannot prohibit women from paying their respects by banning them on the basis of their gender. Kreation Next gives us the details.

“In a landmark decision, the Bombay High Court on Friday ruled that women have the right to enter the inner sanctum of the Haji Ali Dargah in Mumbai, calling the ban on their entry ‘unconstitutional’… “The ban imposed on women from entering the Haji Ali dargah is contrary to Articles 14, 15, 19 and 25 of the Constitution of India. Women should be permitted to enter the dargah on par with men,” a division bench of Justices V M Kanade and Revati Mohite Dere said. Under the said Articles, a person is guaranteed equality before law and has the fundamental right to practice any religion he or she wants. They prohibit discrimination on grounds of religion, gender and so on, and provide freedom of conscience and free profession, practice and propagation of religion.”

While this is good news for women everywhere, the dargah trust intends to challenge the decision in Supreme Court. While only time will tell what the final outcome will be, but this case does bring the focus back to the famous Sabarimala temple that is also known to bar entry to women. The People’s Blog re-raises this issue.

“The Bombay high court decision opening the sanctum of Mumbai’s Haji Ali Dargah to women has brought the focus back on the famous Kerala Sabarimala temple that bars entry to women… One of the holiest Hindu shrines, the Sabarimala Ayyapa temple visited by millions of devotees every year doesn’t allow entry to women aged between 10 and 50 years. The ban has been challenged in the Supreme Court, which is hearing a public interest litigation that says the bar violates a woman’s right to practice her religion. Devotees are upset with attempts to dilute age-old custom while activists are upbeat that their demand to open the temple, which even allows non-Hindus, to all will be met soon.”

Women rejects marriage proposal? She must die by fire.

Speaking of women’s rights, yet another horrifying attempted murder case has taken place against a 25 year old woman. In fact, the case might just turn into murder, as there is little chance that the woman might survive. And why did her attackers think she deserved to die? Because she had the audacity to reject the marriage proposal of her harassers. Vibes247 reports the case.

“In a shocking incident, a 25-year old woman was set ablaze by a man for allegedly turning down his wedding proposal… A relative of the victim, Gita said that whenever the girl used to go out, the boys used to harass her. “It had been seven-ten days since they began troubling her. Still she used to ignore them. When she could not tolerate further, she told this to her brother, who asked him to stay away from her. The harassing stopped for a few days, but then it started again,” she added. Gita said the accused’s name is Abhishek and that he stays in the neighbourhood. “20-25 men came and started beating us with rods. Abhishek’s four-five uncles were also there and with his friends as well. Abhishek started threatening the girl but she refused to marry him. He then poured kerosene on her, set her on fire and ran away,” she added. Gita further stated that there is no hope for the girl’s survival, as 95% of her body is burnt.”

Man has to carry his dead wife for 16 kms

Turns out our society doesn’t just put down women, but rather does not care about people at all. One poor man had to carry the body of this dead wife for 16 kms in an attempt to bring her body back home for her funeral. He had to do this, as he could not afford to pay for an ambulance, and the hospital staff refused to help. Vijay Kumar writes this man’s gut wrenching story.

Among all this, there is a ray of hope and positivity, if we can call it that. Kareena Kapoor Khan walked the ramp at the Lakme Fashion Week in all her pregnant glory. While walking the ramp might be a regular affair for Kareena Kapoor Khan, the fact that her photos were splashed all over the Internet might just lift some taboos that surround pregnant women and their participation in normal life. Anisha Mahal highlights this feat.

“Kareena Kapoor Khan, yes the beautiful mom to be, closed the Lakme Fashion Week Winter Festive 2016 as show stopper for none other than Sabyasachi Mukherjee on August 28. The actress have a golden glow on her face and set the ramp on fire with her confident flawless moves… The mom to be Kareena Kapoor Khan shows off her baby bump with a great confidence, wearing this exquisite olive green heavily embellished lengha and kurti. In the post show press conference Kareena Kapoor Khan said that “For me, it’s quite an emotional moment, as this was the first time we (Kareena and her unborn baby) took the ramp together. It was a moment to cherish”. Also she added “I was happy and confident (on the ramp) and Pregnant woman can walk and fly and for me it’s absolutely normal. When it comes to my work, acting is my passion and I will work till I die. As long as I am doing what I love, I am going to do that.””

A Flying Jatt – A mixed Bag of environmentalism and Sikhism?

Speaking of the film industry, this week the movie A Flying Jatt released, starring Tiger Shroff, Amrita Singh, Jacqueline Fernandez, Kay Kay Menon, and Nathan Jones. Many were looking forward to the movie, despite the fact that the trailer had a childish and whimsical look to it. Or perhaps it was because of it. Anna MM Vetticad shares her review.

“The film is delightful early on when it is laughing at itself and the superhero genre. The scenes in which the protagonist and his family first discover his powers are hysterical, especially his confusion about what the hell is now expected of him. There are plenty of other comedic interludes that make this an interesting experiment in a genre rarely visited by Bollywood that has earned Hollywood billions worldwide… Woven into the film’s overt messaging about environmental pollution is a running tribute to the Sikh community. That element is a mixed bag. I mean, I love that Mrs D skewers idiots who mindlessly mouth the cliché “Sardarji ke baarah baj gaye”. Seriously, community-directed humour is fine, but not when used unrelentingly in personal interactions. Imagine being Sikh, Irish or Polish. How do you admit that you are bored to death with Sardar, Irishman or Pole jokes or even hurt by the non-stop lampooning, without being accused of over-sensitivity, that too by people who would not take even half a wisecrack about themselves or their communities?”

As we are reading all this news, there is a part of us that realize that this article and the news covered in it has been brought to us by the Internet. In that regard, let’s pay a tribute to the Internet, without which there would be no blogging community to speak of. Vritee Technologies points out the journey of the World Wide Web.

“Twenty-five years ago, the World Wide Web was just an idea in a technical paper from an obscure, young computer scientist at a European physics lab. That idea from Tim Berners-Lee at the CERN lab in Switzerland, outlining a way to easily access files on linked computers, paved the way for a global phenomenon that has touched the lives of billions of people. He presented the paper on March 12, 1989, which history has marked as the birthday of the Web…While the Web unified the Internet decades ago, there is nothing “written in stone” saying it can’t fragment anew, the historian reasoned… A big battle for the shape of the Web could be the effect of billions more people getting online with smartphones in parts of developing parts of the world. “The Web is really only half built; it is not worldwide yet,” Weber said.”

We cannot deny the impact that the Internet has had in all of our lives. In that context, Jiniyas Awode has written an ode to the Internet.

“We should be thankful that the internet opened up to the world and didn’t remain some silly govt project. And in spite of naysayers like Krugman who said that it’s impact on the economy would be no greater than the FAX machine, it has blossomed into this most wondrous thing. I am truly grateful to the internet for the people it has helped me connect with, for the life it has made easier, for all the education and knowledge it has put within my reach for free, thus liberating me from my country’s vile, , intellectually stunting education system… May there be more cat videos, more Khan academy’s, more Facebook’s, and more of everything that people prefer. Thank you, and keep doing what you are doing, may you keep optimizing the internet,may there be more creative destruction.”

That is all for this week’s Buzzing Blogosphere. Did you think we covered it all, or do you think we missed out on something important? What is your opinion on these news? We’d love to hear it in the comments section below.

One Reply to “Buzzing Blogosphere: Spotlight on Women”