It’s not September yet, but we’re still waking you up. If you chuckled, then good for us. If you didn’t, all is not lost as we have a bunch of #PerkyTweets to make you smile. August has started, and BlogAdda has pledged to make your month sunnier with its Miami Blues sunglasses giveaway! Once you’ve checked it out, and gathered your jaw which has hit the floor, take a look at the hilarious Indian tweets that we harvested specially for you guys. 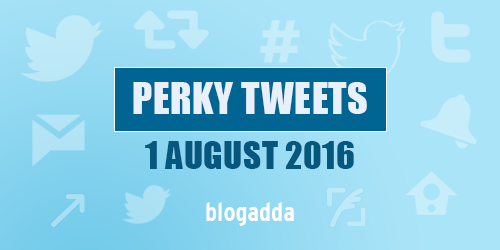 Aamir Khan made a statement in November 2015 & Manohar Parikar is reacting now, i think its high time he should leave Internet Explorer.

People need not say anything to me.
I’m more than capable of overthinking and driving myself to depression.

The greatest mystery for me is why don’t guys get lipstick transfer after kissing in movies etc.

Dear foodies. The plural of crab is crab. Crabs is an infestation that no one wants to eat. PLEASE LEARN TO WRITE CORRECTLY. #grammarnazi

Don’t mention a person’s past mistakes when they are trying to change..That’s like throwing rocks at them while they climb a mountain..!

Nitin Mukesh named his son ‘Nil’ when he saw the number of expressions on his son’s face.

Did these #PerkyTweets work for you? Tell us which ones you liked the best in the comments section below! Submit your own funny tweets here with #PerkyTweets or send them here to win cool Miami Blues sunglasses!