Need a barometer for people’s thoughts, feelings and emotions about what’s happening in the world? Just take a look at Twitter – that aggregator of popular opinion, one tweet at a time. We did the same this Monday with #PerkyTweets and the results are listed below for all to see. No event, happening or pop culture trend is hidden from the all seeing eyes of this social networking site. Salman Khan’s acquittal in the black buck case obviously finds a place in this week’s selection, and so do the current crowd favourites Prisma and Pokemon Go. Check them out! 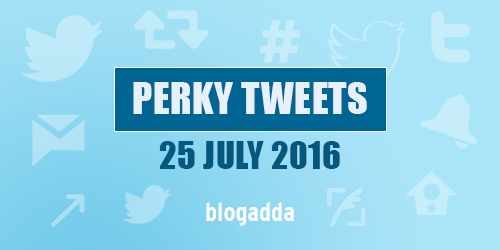 So both the heroes of 2002 had issues with black bucks, one killed them and the other couldn’t bring them back from Swiss banks.

BMC is like a shitty Santa.
“We want functional roads!”
“How about some penguins?”
“Roads. Now.”
“Have you seen their beaks?”

All jokes are okay, but immigration jokes kind of cross the line.

2016: Get up early. Check Twitter and Fb then sleep again…

Sometimes I wonder if we are commenting on actual events or just terribly written headlines & news stories about actual events.

Founder of Prisma App can be called Prismapitamah….!

By far, the most comfortable way to travel in local trains is by chopping of your hands and peacefully boarding the handicapped compartment.

Help! How to disable the phone feature in phone to save battery for Pokémon Go?

LOL, ROFL, and then think. This is the effect that these tweets are supposed to have on you. Tell us which tweets you found the best, and add your own in the comments section below! Even better, submit your own here with #PerkyTweets or submit it here and see your tweet here next week!

Here’s a quick round up of India’s funniest Tweets last week!