Twitter stopped being a social networking site long ago, transforming into a news and opinion website due to its immediacy and use of hashtags. It is the first pit stop for anyone looking for updates on current affairs, and more importantly, the Twitterati’s take on what’s happening in the world. We at #PerkyTweets have our ears to the ground too, as we look out for tweets that might have slipped from your attention. So here it is, this Monday’s fresh catch of the best tweets from India. 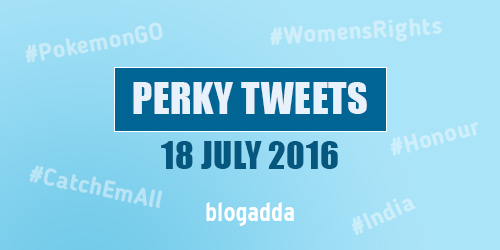 Actually Dronacharya asked Eklavya to make Aadhaar as gurudakshina. Eklavya chose to cut his thumb off instead.

*Meanwhile in Pakistan*
Girl- i wanna be a famous model.
HR- you’re selected, prepare yourself for a shoot.
Girl- *wears bulletproof jacket*

If Sanjay Dutt is not shooting for the next Munna Bhai, Tushar Kapoor for Golmaal and Abhishek Bachchan for next Dhoom, what are they doing?

Don’t make fun of your parents for not understanding technology while you still have to google how to make a soup.

Press to Modi: Sir, Why do you travel so much?

Dear Qandeel’s brother, the world will remember you by her name and not yours.

My friend just found a new pokemon in his office, it yelled “YOU’RE FIRED”#PokemonGo

Did you like this week’s edition of #PerkyTweets?Â If you want to do your bit to perk up people’s lives,Â send your tweet hereÂ with #PerkyTweets or submit it here so other people can see your brilliance on Twitter! We gotta catch ’em all, too!Â  🙂