India has always enjoyed moments of pride when culture and heritage are discussed. India wasn’t called a ‘sone ki chidiya‘ for nothing. Owing to its religious diversity, India is home to spectacular temples, built ages ago by craftsmen and artisans, devoid of any technological advancements or digital designing tools. Yet, these magnificent structures narrate awe inspiring tales of gods and demons, apsaras depicting the age old ‘kathas‘ and changing reigns with new dynasties. These wonders by mankind attract millions of tourists apart from devotees and are a wonder for architects and historians. BlogAdda took a time travel pill and listed out some indigenous temples of India that are amazing examples of Indian craftsmanship. 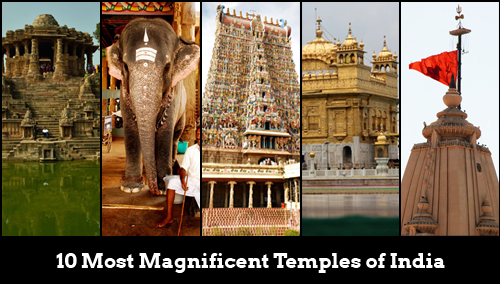 1. An Ode to Sun: Konark Temple 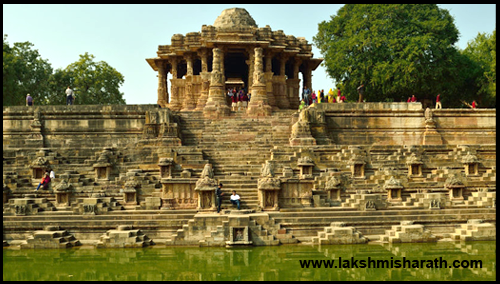 Tagore said, “Here the language of stone surpasses the language of man.” Built by King Bhimdev of the Solanki dynasty, the temple honours the Sun God, an entity that holds a great place in Hindu mythology. The majestic temple is in the form of a chariot, drawn by seven horses balanced on 12 chakras or carefully carved out wheels. One can see the whole magical sight reflecting in the huge water tank in front of the temple with around 108 miniature shrines. Unfortunately, the temple stands in ruins yet one can imagine the grandeur of its heydays. The intricate designs portray botanical motifs and engineering ingenuity of those times. 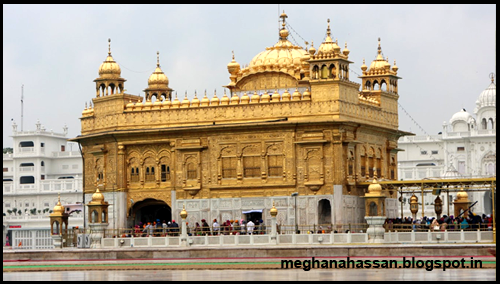 Established by the fifth guru of Sikhs, Sri Guru Arjan Dev Ji in the city of Amritsar, the cornerstone of the holiest abode of Sikhs was laid by a Muslim Sufi saint Sai Hazrat Mian Mir. It has four entrances that allow visitors and devotees from any caste, creed or religion to enter a spiritual haven. The temple has splendid architecture with the main golden structure in the middle of the sacred pond connected through a bridge. The temple is known to serve lakhs of devotees with its simple but sumptuous Guru ka Langar every day without fail. Through its grand marble carvings and palatial built up, the temple attracts tourists and historians from all over the globe. On Diwali and Gurupurabs, the beautiful Swarn Mandir sparkles under the grand lighting and fireworks, creating a mystical scene every year. 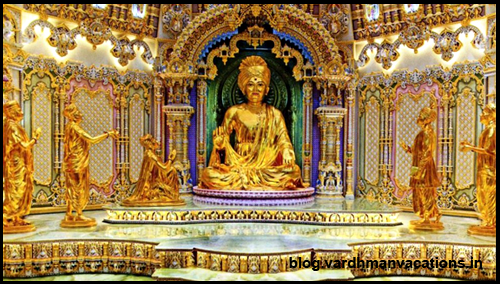 Inspired and built by  Pramukh Swami Maharaj, the spiritual and religious complex was constructed by 11,000 artisans. The temple is dedicated to Bhagwan Swaminarayan reflecting the spirituality and sanctity of ancient architecture. The temple flaunts its Rajasthani sandstone and Italian Carrara marble with shiny images and deities surrounding Swaminarayan, depicting the lineage of their faith. Adding to the lavish structure is a sunken garden in the shape of lotus built with marble that have quotes from famous personalities inscribed on them. The temple is on the top list for anyone visiting Delhi. 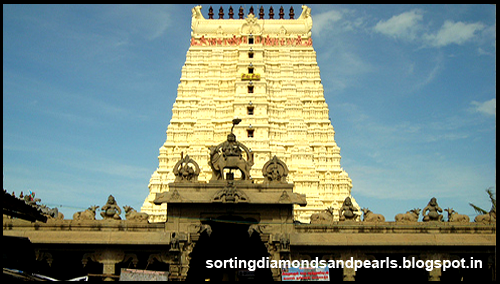 Lord Rama, after killing Ravana, is said to have stepped in Rameshwaram with his wife Sita. To seek forgiveness for his dosh of killing a Brahmin, he worshipped Lord Shiva by establishing his shrine over here. The temple is said to flaunt all designs and art styles of the Dravidian era. With its intricately carved verandahs and corridors, exquisite Sannathis and Mandapams, the temple’s architectural beauty is undoubtedly spectacular. 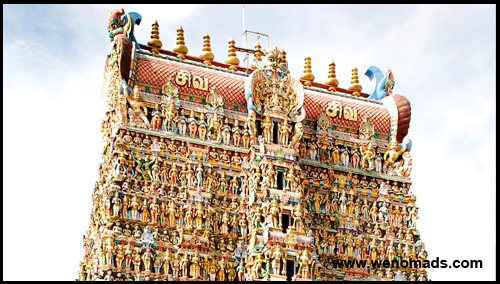 The otherwise bustling streets of Madurai hold the glory of their past in the world famous Madurai temple. The beautifully carved stone structures resting on huge pillars house a thousand stories of the past. The spiritual aura of the temple is unforgettable, with temple bells chiming along the hymns in unison. The temple is a marvel from the past and appears to be a heavenly sight amidst the flickering diya lights at night. It is known for its 100 pillar in the hall which, when struck, produce different musical tones from within. The architecture of the divine temple makes our generation wonder if such marvels are possible to create today. 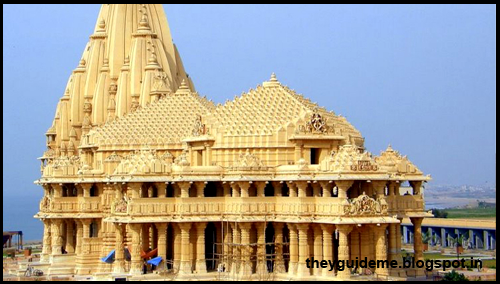 First among the 12 jyotirlings mentioned in the Rig Veda, the temple is associated with the Moon God, hence named Somnath. Reflecting Chalukya style of architecture, the temple illustrated the inherent skill of sompuras, master masons of Gujarat. The temple lives up to the ancient design through its Shikhara, Garbhagrihas, Sabha Mandaps and Nritya Mandaps. One of the peculiarities of the temple is the Baanstambh, a pillar with a globe on its top and an arrow pierced through. There is no piece of land between the temple and Antarctica from the south of the pillar. Looted 17 times by various invaders, the present temple has been resurrected from ashes a lot of times. The architectural grandeur of the temple is starkly visible as sunlight hits the temple roof  at the crack of dawn. 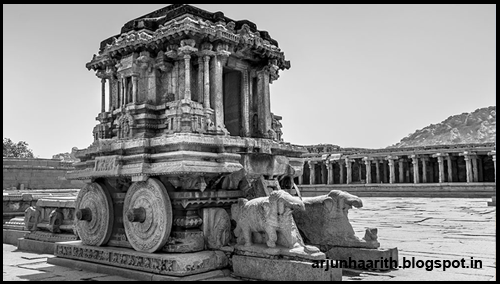 Standing fully intact among the surrounding ruins, the temple appears to be under the constant blessing of Lord Shiva. Virupaksha Temple is believed to be functioning ever since the 7th Century, the oldest temple in India. The temple is dedicated to Lord Shiva and his consort Pampa. The premises silently flaunts its open pillared hall, three chambers and a sanctum. A spectacular visual at sunrise and sunset, the temple holds a charisma attracting tourists and devotees. 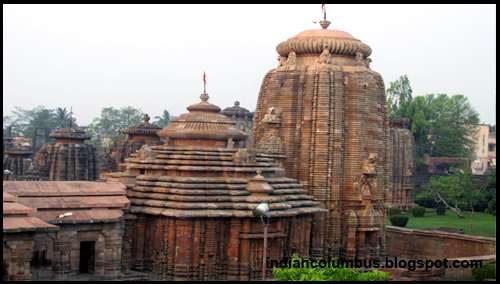 Built in the 11th century, the origin of the temple dates back to 6th or 7th century CE. The gigantic temple is an architectural wonder among historically significant sculptures. The design of the temple is Deula type with a Vimana rising up 180 feet in height. All other parts of the temple are in decreasing height. With aesthetically sculpted exterior walls, the temple is a pure architect’s delight. The pyramidal roof and perforated walls portray the unique arts prevalent in the previous times that remain unmatched till date. 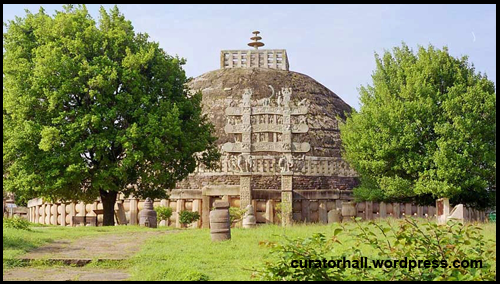 According to the Encyclopedia Britannica, the cosmic axis – the line connecting heaven with the centre of the earth. may run through the Sanchi Stupa, which is considered the most important site of ancient Indian sculpture. 2300 years ago, the towering structure is surrounded by minor stupas, monastery ruins and the famous communal bowl cut out from one huge boulder. The great Stupa is adorned with four gateways in cardinal directions and sculptures depicting phases of Buddha’s life. Dipped in nature’s silence, the place holds thousands of years’ worth of art and sculpting expertise. Although the mystery of being the centre of the earth still remains unanswered, yet the great Stupa appears to reach towards the sky. The place is indeed a visual ecstasy. 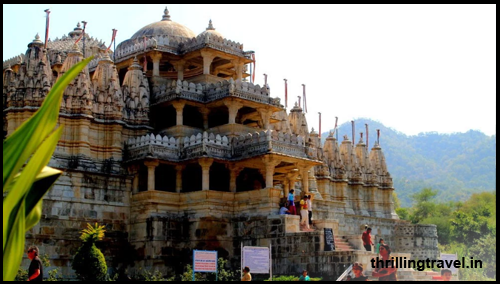 One of the most stunning Jain temples, this beautiful creation was built by a devotee Dharna Shah in the 15th century with the plans and is dedicated to Lord Adinath. Built by a sculptor Depa, the temple is in the shape of celestial vehicle Nalinigulm Vimana  and consists of uncountable pillars and jaw dropping carved ceiling. The gorgeous structure is built in such a way that all the 4 entries end up in the main courtyard. A sudden drop in temperature even in the scorching heat remains an unanswered trick by the makers. The marble tiles of the temple portray a beautiful shade, enhancing beauty along with the day. Overall, the temple is a timeless piece of ancient beauty and is definitely a joy forever!

These marvels of mankind appear to be made with a mystic power that still seems achievable in the present technology equipped generation. Weather it is the sweat and blood that has gone under the construction of these pristine wonders or the untold stories of the past that seem hidden in the carvings and remain, surely these places hold a divine place with an aura that is etched in the visitor’s memory forever. One is awestruck gaping at the beauty and serenity these pious places of worship behold. You don’t need to be a devout pilgrim to appreciate them or marvel at them; all they need is an appreciative eye to look through the intricacies that make them one of the biggest wonders of our country.

2 Replies to “Collective: 10 Most Magnificent Temples of India”