Virtual Reality. Augmented Reality. Evolving KPIs. Content Marketing. Vernacular Content. Multiplatform Design. Big Data. These were the buzzwords for two days at Taj Land’s End, Mumbai during the Click Asia Summit 2016. A conference with a difference, it got together the best names in the digital industry from across the globe to give people a glimpse into what the digital future looks like. 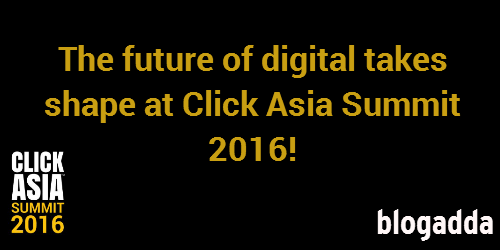 With Keynote Speakers like Robert Scoble, Ryan Bonnici, Markus Keiper and Ayal Steiner taking the stage to set the tone, the 2 days were bound to be full of digital and marketing insights from the best in the business. The 2016 edition of Click Asia Summit were full of digital hacks, quotable quotes and discussions that will most likely shape the digital strategy of corporates and agencies for the next couple of years. #CAS16 was one of the top trending topics in India over the weekend, and that’s testament enough to how successful and exciting the conference was. Well, let’s take a look at the two days of Click Asia Summit 2016, not through words, but through tweets and visual content. After all, that’s what we learned from Click Asia Summit 16 – that Content and Social Networking are Kings!

15 minutes into @Scobleizer‘s #KeynoteSpeech at #CAS16 and we’re already blown away by what the future looks like! pic.twitter.com/R8Dg1ILHc1

Privacy’s dead. And we’re gonna kill it over and over again through the devices we use: @Scobleizer at @ClickAsiaSummit. #CAS16

.@Natashapuri what if I told you I recorded the whole session on Facebook just for you here 👉 https://t.co/uYNJ5I8uRK 😜 #CAS16

Digitalization cannot be retroactive or fitted into organization’s marketing strategy at a later stage: Lead from the start #CAS16

Digitalization cannot be retroactive or fitted into organization’s marketing strategy at a later stage: Lead from the start #CAS16

“Digital is a tactic, not a strategy. What’s your strategy?” What I’m talking on today 425pm at #CAS16 #ClickAsiaSummit @ClickAsiaSummit

What wins in the market is Product offering & not marketing. @maheshmurthy at #CAS16 pic.twitter.com/tmoRhuZWq9

Day 2 of #CAS16 kickstarts with three parallel workshops. I am at “Walking in the Consumers Shoes” by Lucy McCabe, President @Ogilvy_RED

Hi @ClickAsiaSummit and @write2kavita thank you for the entertaining panel on “Why are Brands Still Fucking with Content?” Lots to learn!

Filmy way to explain how to market fast and sell faster #CAS16 by @ketansabnis pic.twitter.com/hzIJTXIRTJ

It is very important to get the moving parts right in #digitalmarketing for impact. #CAS16

It’s ok to lose if it doesn’t work; populate with ppl from other world; collaboration @babitabaruah #CAS16 #Hacks #BuildingDigitalDna

And that’s a wrap on @ClickAsiaSummit! Lots of digital food for thought for the coming days! Great show #CAS16 pic.twitter.com/m8Kr0G9dj2

So that was our round up of the Click Asia Summit 2016. We hope you have gotten a fair idea of what the digital tomorrow looks like. BlogAdda is proud to have partnered with the Summit, to experience the awesomeness and to bring it to you through our tweets and this blog post. That’s not all though, we have some insightful and exclusive interviews with the #CAS16 speakers for you, which we’ll put up soon. If you’re related in anyway to the digital world, you definitely need to keep an eye out for them!