The Renault India #LiveLodgycal event was held in the breathtakingly beautiful Leela Palace Resort in Goa. 40 lucky bloggers, of whom 5 were winners of the #LiveLodgycal contest and 35 bloggers were invited for this activity. 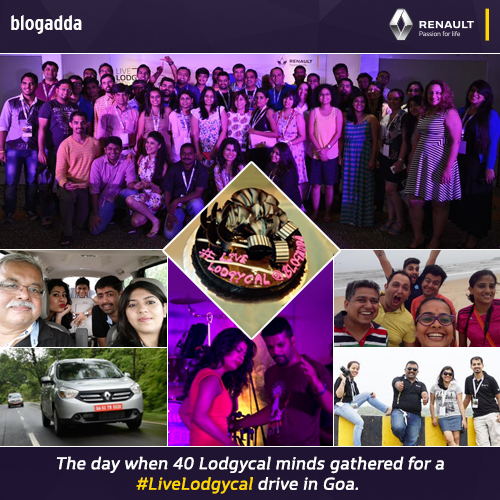 The lucky bloggers represented different cities from all over India, and each of them got to test drive the brand new and recently launched MPV from Renault â€“ the Renault Lodgy.

Day 1 saw the bloggers arriving in Goa late afternoon. Delayed flights, turbulence and rains did not dampen the spirit of the bloggers and on their arrival at the Leela Palace Resort, the Renault & BlogAdda teams welcomed them all and joined the bloggers for a high tea organized at the venue. Once they were all done sipping on some warm cups of coffee and tea, the bloggers headed to their rooms to relax before they could take on the rest of the evening.

Spellbound by the beautiful @TourismGoa rain touched landscape as we drive from airport to The Leela for #LiveLodgycal â€” Aditi Mathur Kumar (@adicrazy) June 19, 2015

The view, the view from the window ðŸ˜ #LiveLodgycal #Goa pic.twitter.com/zYUfneSZjK

The host for the evening was the very gorgeous Archana Pania. As she welcomed the bloggers to the #LiveLodgycal activity, it was time for the games to begin!

BlogAdda had organized several offline and online activities for the bloggers and each blogger earned points based on the activities. Teams of 4 were made and each team came up with some really cool names, the condition being that the team names had to be linked to some feature of the Renault Lodgy. The 10 teams were:

The first game all the bloggers had to participate in was a group activity. This activity required all the teams to introduce themselves in a quirky and interesting manner. Once the introductions were complete, it was time to move on and get to know more about Renault India and the fantastic features of the Renault Lodgy. Mr. Maneesh Gadge from the Renault India team gave a small presentation on the brand and the car. A delightful dinner awaited the tired bloggers who were all ready to call it a night after a long day.

Day 2 was even more exciting for everyone part of the event, all the teams were up and about, energetic and all set to hit the road. After a lovely breakfast, the drive was flagged off and teams geared up with their cameras and other awesome devices, drove the Lodgy till â€˜The Lalit’ hotel.

Each team member had the opportunity to drive the Renault Lodgy and thoroughly enjoyed the drive with the weather being an absolute sport along with the beautiful scenic beauty Goa offered along the drive. On reaching the Lalit hotel, teams took a break for lunch. Once they finished enjoying the scrumptious meal, they all took some time out on the Lalit hotel’s private beach. Post lunch, teams drove back to The Leela Palace hotel. Through the day, teams were encouraged to participate in the various social media activities which made the drive all the more interesting.

Post high tea, bloggers had some photo-ops with the beautiful property that the Leela Palace is. Bloggers decided to spend their leisure time by exploring the property before meeting again for dinner and to enjoy some conversations and live entertainment in the banquet hall before dinner.

A lively Panel Discussion of the bloggers starts off at the #LiveLodgycal event pic.twitter.com/VyjppZjuNq â€” Renault India (@RenaultIndia) June 20, 2015

Goa’s finest live band â€˜Forefront’ boosted the energy levels of everyone to an all time high, and bloggers were welcomed on stage to join the band and perform. The band belted out some lively tunes which had the bloggers dancing on till midnight. It was one fantastic party and a wonderful end to the event.

The BIGGEST PARTY OF THE bloggers is happening at #Livelodgycal here. pic.twitter.com/3q6mtuQ9pU â€” BlogAdda (@blogadda) June 20, 2015

The lovely beach, amazing weather, fun games and a whole bunch of enthusiastic bloggers ever ready to participate in every activity during the weekend made the event even more memorable! Not surprising, #LiveLodgycal was seen trending on social media through the weekend!

Super thanks @blogadda & @RenaultIndia for treating us so well. Just the ‘kick’ you needed before the deadly week up ahead #LiveLodgycal 🙂 â€” The Brute (@Deckle_Edge) June 21, 2015

Thanks once more @blogadda and @RenaultIndia for the wonderful experience of #LiveLodgycal at @TheLeelaHotels Goa. Simply magical weekend.

And back home to a wet-wet #Mumbai. The #LiveLodgycal weekend was a blast. Thank you @blogadda!

Kudos to the bloggers for the successful event and a big thank you to the Renault India team for giving us this fantastic opportunity to experience something new.

Some more fun tweets from the event & the Facebook Album!

If I look back, this picture sums up the entire #LiveLodgycal experience for me. Effervescent & artistic @blogadda pic.twitter.com/6HCccMDCIX

Our experience on the new Renault Lodgy: https://t.co/fJnN6SqsRg #LiveLodgycal @blogadda