What happens when Politics, Power and Public cross paths? Are you aware about the effects and side-effects of this combination? Confused? Don’t be. Our Premium Blogger, Arvind Passey is here at your adda to discuss the current scenario of our nation and how this trio (politics, power and public) has immensely affected our lives in his post ‘Of guided missiles and misguided men’. A post that highlights the most common and important topic of today. Get a reality check! Over to Arvind. 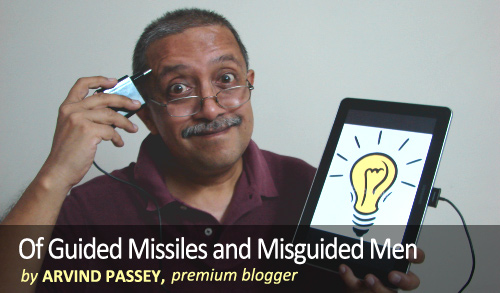 Politics, power, and public are three Ps that are always together… I was thinking initially of giving this post a simpler and more direct title: ‘The three Ps – Politics, Power, and Public’ but realized that there was less drama apparent than it actually had in it. The three Ps are like a primed grenade set to explode any time. Yes, ‘primed’ grenades do not need reasons other than a little tug and pull and then a massive heave and throw! No wonder then that H. L. Mencken remarked: ‘The whole aim of practical politics is to keep the populace alarmed (and hence clamorous to be led to safety) by menacing it with an endless series of hobgoblins, all of them imaginary.’

Mencken’s observation makes me conclude that imagination is the prime ingredient that mixes these three Ps into a sauce… and as I wrote this line, my wife (I call her Specky) peered over my shoulders and said, ‘Is this some sort recipe that you are now writing?’

‘Well, the political situation in our country is not less than a dish,’ I answered, ‘though this dish happens to be rather expensive.’

She continued her analysis, ‘There’s a strange mix of emotions you’ve managed in the lines written so far. I read the title and get a feeling that there is a hidden aggression in the article, and then as I stumble on the mention of the three Ps, I have an intuitive feel that there will be a mixture of humour, satire, and anger with a thick envelope of sadness. And then with suddenness, you hop on to ingredients and sauces. Hope you’re clear about what you want to write?’

Specky had observed correctly… but had failed to notice that when politics, power, and public come together there is a complex cloud of emotions produced. This cloud can be romantic, aggressive, scientific, literate, arrogant, uneducated, philandering, plundering, pathetic, sympathetic, confused, clear, humble, submissive, corrupt, true, honest, lying… and you can go on adding more and more as you go deeper into this concoction! This mixture is indeed explosive and it does resemble a guided missile any day… with all the misguided men at the helm.

Take a look at what is making headlines today and you’ll know where I’m going. Read the situation as it exists in the real world and you’ll know that political pragmatism, social activism, and radical dreams meander slowly into each other and create a mushy mesh that we call India.

The three Ps aren’t really the politician, the power struggles, and the duped public… the three Ps are much more complex. They are inside each of us. Well, we are symbolic of politics, power, and public irrespective of what position we hold in the social matrix.

In an earlier article, I had written:

Corruption was ambling along so well. If there were cops asking for bribes, there were people willing to offer them for either getting away from being punished or for getting a favour that wouldn’t have been there. There was bonhomie all around. One was either giving money with a smile or receiving it with a smile. Some even said that our economy moved faster and higher because of this enigma called corruption. Most of us did not really mind because if one was giving something to someone, there was probably someone offering something as well. Most, I said.

Even the Government was happy pulling up some bureaucrat now and then and patting its back for all to see. The media was content to get juicy bits for a scoop that everyone knew would fizzle away even before the next one was magnanimously offered by a neta or a babu. We were being recognized the world over for our selling skills… yes, didn’t someone sell the nation when Bofors was bought? Entire States were offered to gun-toting gangs because a few people in power were busy with their alchemy of converting ‘chara’ into gold! At another level newspapers started selling space to improve bottom-lines. Their editors scribbled lines on bottoms… and middles… and oh, how happy were those corrupt times!

You need money? Embrace corruption. You need to do something? Get corrupt. You need a ticket to a cricket match? Contact the corrupt. You’re bored? Join the corrupt club. We have all seen corruption strutting around in white khadi, starched khaki, impeccable mufti, designer clothing, and even tatters… such is the wide ambit of this menace.

Specky read this part and nodded her head in agreement, saying, ‘Yes, only the other day I saw that power-drunk MCD head clerk grovelling at the feet of the doctor in the hospital. Yes, the equation changes but the players are always the same… it is always power, politics, and public.’

‘Yes, politics isn’t always about the politicians who shuffle in the corridors of our parliament. Politics is all about the machinations of the common man also.‘

The paradox is that we find ourselves confronting the gonadal giggles of this trio of politics, power, and public every day. We do not know where or how to stop which part of this trio or what ratio to encourage for an evolved existence. We are like the social scientist who looks at a glass of water on a table and sees what happens after a day… the level comes down. He decides that more water needs to be added. A day comes when even the glass needs to be thoroughly cleaned and refilled with water. The social scientist then thinks: ‘Countries and governments are the same. We have a constitution in place. We have laws. We have regulations and regulators. We have a democratic process too. We also have politicians. They’re all vital. However good the system, it needs to be revitalised periodically. Revisited. Revised. Redone sometimes. This needs a catalyst or a push — whatever works.‘ The social scientist theorise a lot and maybe even concludes a lot… but the cycle of theorizing and concluding has been going on for eons now and we’re still undecided as to which conclusion to finally adopt.

‘Is there really a right conclusion or solution or proportion of power, politics, and public? A rationalisation to make life free of the conflict that we so dislike?’

I think there is one. And because the 2nd of October has just gone by and I happened to read so many quotes by the Mahatma, I have one: ‘It is better to be violent, if there is violence in our hearts, than to put on the cloak of nonviolence to cover impotence.’ Let me interpret it for you:

The corrupt needs to declare in the open that he loves being corrupt. This may ultimately lead to his leaving corrupt practices as no one likes to be publically hailed as corrupt. The same way, a violent man, a thief, a plunderer, a rapist, a dacoit, a liar and you can think of any number of negative influences here… they must all convince themselves not to put on the cloak of what they are not… the result will surely be what the Mahatma must have imagined in his mind!

One Reply to “Of Guided Missiles and Misguided Men”