How many of you went back into history and started analyzing and connecting the dotsÂ after reading the first part of the interview with Ashwin Sanghi? If the first part was fantabulous, then the second part is going to be doubly fantabulous. In this second part, Ashwin speaks about Poli-tic(k)s, his business, his family, his thoughts on the Indian blogosphere and much much more. So, are we ready? Here we go… 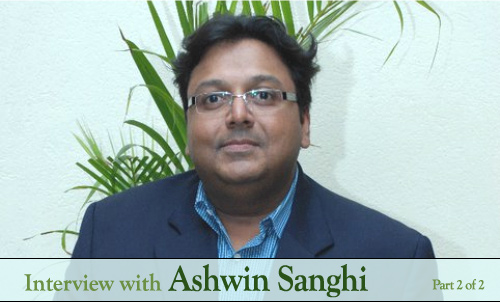 Q: ‘Poli’ in Latin means ‘many’ and ‘ticks’ means ‘blood sucking creatures’. So, politics is put up by you as many blood sucking creatures in one place. 😛 What do you feel about the current political scenario? What similarities and changes have you observed in the Government of today since Chanakya’s time, 2300 years ago?

Too much attention seems to be given to the political machinations of Chanakya whereas insufficient attention is paid to the fact that his seminal work, the Arthashastra, was mostly about good governance. I was absolutely amazed to find that the Arthashastra even specifies how grain should be stored, how a treasury should be constructed, the ideal form of taxation, maintenance of law and order, the preferred width of a carriage road, and virtually every aspect of sensible government policy. It is unfortunate to see that what plagues India today is simply a fundamental lack of governance. I think the lesson for all of us is that we need to pay more attention to Chanakya’s lessons in governance rather than his lessons on realpolitik. Chanakya’s realpolitik was a corollary to his bigger purpose – uniting Bharat and giving it good governance. Today’s realpolitik is purely self-serving.

Q: A Group Director, husband, father, son and a storyteller. What handy tips does Ashwin Sanghi have to manage his corporate, personal, author and blogging life? What does Anushika, your wife, have to say about your dual professions?

If one can eliminate the â€œIâ€ from one’s thinking and realize that whatever one achieves is due to a higher power, it can help in keeping one’s feet firmly planted on the ground. As is often said, kneeling keeps us in good standing. Dealing with success is often more dangerous than dealing with failure. Failure makes one cautious and persevering, success can make one inattentive and slack. I can only hope and pray that I remain firmly anchored and do not allow myself to drift. My wife is my greatest anchor – she is quick to bring me down to earth when I choose to float, and I thank her for that. I would probably never have been a writer had it not been for her constant encouragement and support.

Q: You call yourself a ‘pucca Marwari businessman’. 🙂 So, would you want to research on your own caste and write a book on it, or take inspiration from it in future writings?

Not really. I chose to write primarily as an escape from the humdrum of my day job. I don’t think that anything that takes me back into my work environment would excite me enough to write a novel about it. The subject needs to be way out there, almost outer space! A Marwari extra-terrestrialâ€¦ now that’s something I could possibly consider!

Q: You like fiction that sounds like fact and fact that sounds like fiction. Since you touch upon history and mix it with fiction, it surely makes a reader more hooked on to your book. But there might be people who dislike tackling with history in that manner. How well do you handle their criticism? Who are your best critics?

The problem with the purists is that they have their own definitions mixed up. What we know as the Ramayana today is actually Tulsidas’s Ramcharitamanas which was written in the sixteenth century. It is remarkably different to Valmiki’s Ramayana, which was written around two thousand years earlier. In the sixteenth century, a reader would probably say that Tulsidas was distorting the history of Rama. In 2011, we consider the Tulsidas version as the de facto history of Rama without demur. In India, the oral tradition has been stronger than the written one and we all know that oral traditions are a bit like Chinese whispersâ€”the statement that comes out at the end of the chain is rarely what it started out as. We also know that history is simply the victor’s version of events. In view of this, to what extent should one believe history?

In Greek antiquity, the Iliad would have been seen as history whereas today it is viewed as literature. Which view is the right one? The fact of the matter is that the lines between fact and fiction have always been blurred, it’s just that we’ve not noticed the blurring.

As regards to criticism, I’m quite used to being blessed and damned, praised and criticized, believed and disbelieved, all within the span of a single day. Actually I do not mind any of the above. What I would hate is being ignored. My best critics are the ones whose comments have actually hit home and have produced change. For example, with The Rozabal Line, one of my staunchest critics on Amazon.com eventually became one of my most ardent fans after we corresponded and exchanged frank views. I even shared an early version of the manuscript of Chanakya’s Chant with her in order to seek her critique.

Q: A little whiskey and a little rum is the new way to look handsome. 🙂 Are these also the tools which make you write even better? What are your interests other than writing and running a business? If Ashwin Sanghi was not a writer or a businessman, then what would he be?

Probably a professor. I’ve always loved talking to an audience and professors have a daily captive audience of students to whom they can talk! Other interests? Impossible to have any with the dual careers that I follow: my life revolves around my work, my writing and my family. And yes, the word whiskey is derived from the Gaelic uisge beatha or water of life. It’s very much part of my writing process!

I think that the key ingredient in effective marketing of one’s books is engagement. We need to figure out ways of engaging our potential readership. Video trailers are one way to whet the appetite. Another way is to offer a free preview of one chapter of the book. It can really help in the decision-making process of a reader who has a limited budget available for reading. Active participation on social media platforms such as Twitter and Facebook are terrific for building up one-on-one relationships with one’s readers.

When we launched Chanakya’s Chant, we took the central Sanskrit shloka that forms the core of the book and set it to music and made it available as a free MP3 download. Many readers said that they enjoyed hearing it on their iPods while reading the book because it enhanced the feel and atmosphere of the story. I honestly think that the marketing formula is that there is no formula. You need to find ways to instinctively reach out to your audience and they, in turn, will reciprocate.

Social media is one way that I promote my blog. I’m very disciplined about always including my blog address as an email signature in whatever communication I send out. My blog address also features on the back cover of my novels.

Usually. I see comments as an opportunity for a conversation. I may not respond immediately, but I usually try and do so within a day or two.

The spontaneity of the medium. People seem to lose their inhibitions on the net and this makes them much more open to free and frank discussion. One should take full advantage of such openness.

There are some that have truly found their niche while many are simply trying too hard to be too many things to too many people. Of the ones that I follow quite regularly, I find that The Secret Journal of Rakesh Jhunjhunwala (Read his interview)Â is absolutely hilarious; Gurcharan Das’s blog always has thought-provoking views; India Uncut by Amit Varma is refreshingly irreverent; Weird India is another place that I enjoy reading stuff that can only happen in India.

Start (there are far too many who keep thinking about it but don’t).

Q: What is the future of Blogging according to you?

There are those who say that Blogging will disappear because of Facebook and Twitter. I would beg to disagree. I see Facebook and Twitter as connective tissue between blogs, not as direct competition to blogs. One’s blog is one’s permanent residence. You may stay in hotels, dine in restaurants or walk down the street, but at the end of the day you will return to your home – your blog.

Ashwin, Thank you once again for this wonderful interview. It was a pleasure connecting history with the present. Thanks to you, we are sure, many of our readers have started intercepting and analyzing the various facets of Indian History. Readers, any questions? It is all yours now. 🙂