34 years back, on a dark stormy night, lightning struck and at the same time was born the blogger who would be interviewed by us 34 years later. 😀 He has this inborn quality by which he can make even the person on his worst day smile. He has been christened as India’s second funniest blogger and is also the Associate VP â€“ Product Management, ibibo.com. We are proud to have Jamshed Rajan AKA Jammy of Ouch My Toe at our ADDA for an interview which will leave our readers drooling over his interview and his humour. Join the Band in welcoming Jammy! 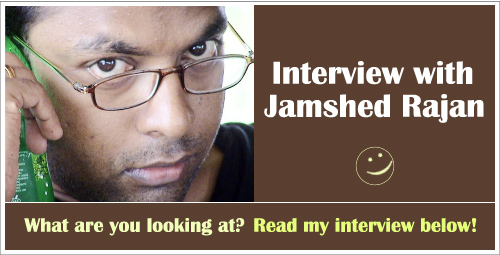 A: Technically, I started blogging around 2003â€¦but I have been writing for a long time. When in standard VII, I had copied down a Hardy Boys novel by Franklin W Dixon called â€˜The Sign of the Crooked Arrow’ in a notebook and named it â€˜The Sign of the Twisted Arrow.’ Thank God, in spite of the wow factor (a standard VII student writing a mystery novel!) the publishers returned it with an apology letter.

A: My topics are anecdotal, so obviously they revolve around my wife, daughter, parents and in-laws. If I were sophisticated, I would probably call it â€˜Slice of Life’ writing. Better humor writers like Great Bong can write on any topic. I am like those Bill Cosbys, Sue Townsends & Erma Brombecks of the world who need to pull down their family to make a living.

A: I stop writing. Why else do you think my frequency of blogging is down? If I had killed one man every time I had writer’s blockâ€¦I would have had more murders against my name than George Bush. I expect to overtake Hitler by next summer.

A: The best way to promote ones blog is to wear the URL on your sleeve. This is a problem if you wear whites, beige etc. But a good dry cleaner could do the trick. The more you believe in your blog, the better it is. I so believe in www.ouchmytoe.com that I once rejected a candidate in an interview because she hadn’t heard of www.ouchmytoe.com in spite of being in the internet business for seven years. See, I have promoted my blog twice in this answer itself.

A: If you want to be seen as a celebrity blogger, don’t respond. Aamir Khan doesn’t come to the awards functions not because he hates the awards or he doesn’t have the timeâ€¦.he is just upping his celebrity quotient. Though, frankly I did give it a tryâ€¦but my job at ibibo.com doesn’t provide me any bandwidth. It is a luxury to even write a single blog post in a fortnight.

Q: Rhea Rajan is the heir to the throne of India’s funniest blogger. Has she got the qualities of her father or her mother? What do you see her becoming 10 years down theÂ line?

A: Rekha, my wife, wants her to be a doctor. I want her to be an engineer and our parents want her to be an IAS. It is all figured out. We also fell for one of the Educational Loans advertisements and started saving. Regarding your question on whom our 3 year old daughter Rhea Rajan has taken after. I think both. The other day, she dropped a wet towel on the floor (like me) and two minutes later picked it up, gave me a stare and went out of the room (like her mother).

As for your first questionâ€¦yes she has already started plagiarizing. She claims â€˜The Ugly Duckling’ and â€˜Cindrella’ are Rhea’s stories. No, seriously. You can check out her blog at www.rhearajan.com.

Q: Jammy makes people smile and that makes God happy. He grants three wishes. What will Jammy wish and why?

A: First, I wish Tiger Woods wife never found out the truth. I mean, the guy who can manage how-many-was-it-at-last-count mistresses deserves some credit (some privacy and some funds). They do say that a lion would never cheat on his wife but a Tiger Woodâ€¦.but still my heart goes out to the guy.

Second, I want World peace. Miss Universes have been requesting for World Peace for the last 50 years at every pageant but there has been no progress. This is proof that

God doesn’t listen to beautiful people. Is this also proof then that God will listen to a short, dark, podgy 34-year old man? Maybe notâ€¦.hence I will have to use my second wish for this.

Like Kaykai, wife of King Dashrath, I would like to keep my third wish for the time when I want to banish my wife to the jungle.

A: I got married in September 2004, so when my wife was making resolutions for me in 2005 there was still some love left for me. Year 2010 hasn’t been that good. According to her, I have quit smoking, drinking and flirting this yearâ€¦.after she reads this interview perhaps she will start suspecting me again.

As for her resolutions this year, I just have one that can solve all my problems: She should start respecting short, dark and ugly men like me.

Q: You seem to love Narendra Modi, India’s statue of Liberty. 🙂 Which other politicians does Jammy take note of and why? Will we ever see Jammy getting into Indian politics as even that is one form of community service, right? 😛

A: I do have some political favourites. The cattle-in-the-mouth Shashi Tharoor, and the revealing-CD-wielding Amar Singh. And yes, ND Tiwariâ€¦wish I could have his virility when I am as old. More than that, wish there are young girls willing to spend time with me when I am that old.

Q: “No man is truly married until he understands every word his wife is NOT saying.” quotes a wise man. Can you share with our readers the secret for successful marriage?

A: The same wise man also said that the perfect marriage is possible only if the husband is deaf and the wife is dumb. We have a half-perfect marriage going for usâ€¦.and let me tell you I am NOT deaf. But seriously, the secret to a successful marriage is in cheating. Research has shown that cheaters make good husbands. Till they get caught, that is.

Q: The chronicles of a lonely and desperate man penned by Jammy is awesome. Can we christen you as Love Guru? As a Love Guru, how can a man transform from a lonely desperate man to a happily romantic one?

A: First, you need a sexy name. Instead of a drab Jamshed Velayuda Rajanâ€¦change your name to something sexy. Jammy for instance. Second, never aim for what you can’t achieve (I gave up on Priety Zinta & Asin within eight and eleven minutes respectively). Third, ensure your wife isn’t aroundâ€¦.for in her presence you will continue to be lonely & desperate. The last time I gave my wife a rose, she boiled it to make rose water and made some kind of face-pack with it. Well, I have to admit that it was romantic till the face-pack came off.

Q: India’s funniest blogger would have had his share of hilarious and embarrassing moments in life. Let the closet open and our readers know them too 😀

A: There are way too many embarrassing moments in my life. The fact that I can’t remember names, can’t remember faces, can’t be organized, can’t be social, etc. ensure its share of embarrassing moments. If I were to pick one, I would recall that moment in college when I was in love with Shalini Menon (though she didn’t know that I existed). We shared the same bus to college. Having gathered enough courage to gift her a dairy Milk Chocolate (I was relying on Amul’s punchline â€˜A gift for someone you love’ to convey the message), I approached the person sitting next to her in the bus and said: â€˜Please pass this on to your friend, Shalini.â€ She replied: â€œI am her elder sister Sunita. How dare you give such things to my younger sister?â€

Three years later, on the last day of college I came to know that Sunita had never told Shalini about my love for her. And here I had wasted all three years of my college waiting for the â€˜Yes’ of a girl who didn’t know.

When we both confronted Sunita, she just said: â€œRemember Shaliniâ€¦.one day we shared a Dairy Milk in the bus? He had given to us. Sweet na?â€

Hope you all are still ROFLing over the cheeky humour of Jamshed Rajan Aka Jammy. What do you think of his blog? Would you like to add anything to the interview? Do let us know as there is a second part coming up pretty soon of this interview. Till then,
Connect with Jammy: Blog. BlogAdda, Twitter.

9 Replies to “Interview with Jamshed Rajan”