The TiE Entrepreneurship Summit finally came to a close. The event which started with an intriguing keynote moderated by Shekhar Gupta talking to Ratan Tata and Narayan Murthy came to end with an awesome motivational speech by Dr Deepak Chopra. Here is a little flashback on what happened at the event. 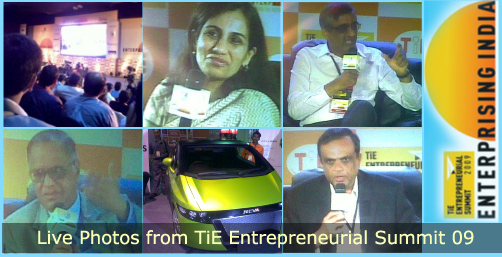 We then had an awesome conversation with Mr Shashi Ruia and Mr Jaiprakash Gaur. Both Mr Ruia and Mr Gaur shared their experiences and taught us a lot of things. It was lunch time on Day one. After the sumptuous lunch, we had the gurukul sessions and talk with Capt Gopinath. We also had Vimal Shah, Manish Agarwal, Archana Hingorani & Suneet Maheshwari talking about the Infrastructure outlook in India.

Also the ‘Health is Wealth’ session moderated by Malvinder Singh where he introduced Varaprasad Reddy, Ashwin Naik and Rajeev Kher spoke about the future of health industry in India. The Day one of the session ended with a bang with The Difficulty of being Good…A Townhall meet with Gurcharan Das, Malvinder Singh, Rama Bijapurkar, Shekhar Gupta, Capt. Gopinath, Kiran Bedi, Vinita Bali and Shaffi Mather spoke their heart out. Barkha Dutt was conspicuous of her absence.

The Day 2 of #tes09 started with introductions and Made in India session moderated by KV Kamath. It was followed by an enterprising moment called – Olympic Quest where we had Mr Geet Sethi, Mr Leander Paes and Mr Viren Rasquinha talking about the the foundation which they had setup. This talk moved the audience and we had a lot of impromptu donations being made for the foundation. The day got even better with the powerful talk by Anupam Mishra where he talked about Rain Harvesting in Rajasthan and much more which was followed by lunch.

After lunch, We had a lot of parallel sessions featuring the likes of Chanda Kocchar, Nishit Desai, Rohini Nilekani, Kiran A, Jerry Rao and many more talking about a lot of interesting topics. The last two sessions for the day had talks from Harsh Mariwala and Nandan Nilekani where the latter spoke about UID and the challenges which lies ahead. This must be the first time that Nandan spoke in detail about UID. A bit surprised that the mainstream media didn’t pick this up big time – he revealed that the number will be a 16 digit number and he will also open up API for UID so that there can be many products made around it. The surprise of the evening was the performance by  the original band of R.D Burman followed by a gala dinner.

The final day of #tes09 started with the awesome talk by Kishore Biyani who has treated the Indian Consumers as his god. It was followed by the talk about Family Transitions where Prashant Ruia shared his experiences and the Ruia family story with all of us.

For all those who had visited our TED India Dashboard, you would have surely heard about Dr Devdutt Patnaik. Yes he was the next speaker at TiE Summit 09 and what a powerful talk it was. He is the ‘Chief Belief Officer’ in the Future group, the first of its kind. After the power talk, in the next two talks we witnessed the power of a woman entrepreneur and an entrepreneur with no formal education alongwith some very inspirational talk.

The penultimate session of the day was moderated by R Gopalakrishnan and had one of the best speakers. A Muruganatham who spoke from the heart and won the audience’s heart with his ‘Sanitary Napkin’ story! He got a standing ovation from the crowd present which was truly deserved.  The closing keynote of the summit was by Dr Deepak Chopra thereby drawing the curtains to one of the top events of 2009.

TiE did an amazing job with this event where they tried some really unconventional methods as the market place set, gurukul sessions, VC connects in the morning and entertainment in the evening. Kudos to TiE Mumbai where Lavin Mirchandani, Manak Singh, Zankhana Kaur and the team did an awesome job. We were proud to be the partners for the event and did a lot to bring the essence of the event LIVE via tweets, photos, videos and more. You can have a look at the TiE Entrepreneurial Summit Dashboard and read our timeline on twitter at LIVEadda to watch the live bytes of information from the event.