Well, well, well. What have we here? After the intriguing first part ofÂ  interview of the brains behind Punetech.com, we are back with the second part. In this part, Navin talks about his Patents, Pune. BharatHealth.com and much more. We promise you that after reading this interview, you would know another side of Navin Kabra unknown to many. Here is Navin Kabra of Punetech.com with his views……… 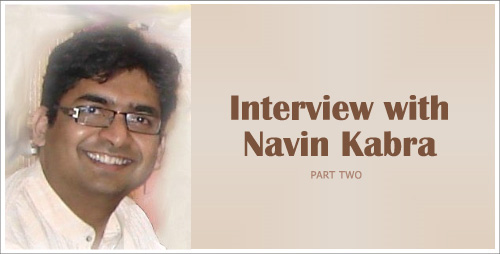 I can’t pick one benefit of blogging as the most gratifying. There’s a long list:

Q: ‘Can we use technology to solve some of Pune’s problems?’ is one of your recent posts. How do you think, can a local governing body effectively use technology for the benefit of the community and is Pune using one?

Frankly, any government body is an incredibly complex beast with many moving parts and complex interplay of issues, departments, people, interests, budgets, jurisdictions, politics and many other things. It is stupid to think that I (or for that matter most other bloggers who write grand blog posts on this topic) can even understand the issues, let alone suggest ways in which they can improve (with the use of technology, or without). Hence, I’m going to skip the question of how a local governing body can use technology – I am simply not qualified to answer it.

A better question to ask is, can the community use technology to benefit itself without necessarily involving the governing bodies? There, I think, is a world fraught with possibilities. The Pune Governance wiki is a great example of a good beginning. Just poke around there to see the huge amount of information that is collected there – and it is all by volunteers, without the official involvement of any government body (although, I believe, many departments are updating some sections of that site informally).

I should also mention that in the post you’re talking about, I was actually just channeling the thoughts of Unmesh Mayekar, CEO of sadakmap.com, and a PuneTech reader. He suggested that we start using PuneTech and/or other community forums that exist in Pune to find like minded technologists who are interested in putting in their bit to do something for the community.

Q: You have around 9 patents in your name and more than 20 pending for approval. Woah, that is some achievement! Can you give us some insights on some of them? How easy or difficult is to go through the filing process and then monitoring unauthorized usage of it?

Actually, I’ve lost count of how many applications I have pending, but it’s probably a dozen, not 20. Also, all these patents are now owned by the companies that I worked for when I filed the patents, and not by me. So, I don’t have any involvement in monitoring the unauthorized usage of these patents.

Most software companies don’t file patents for “offensive” purposes, i.e. with the intention of monitoring unauthorized usage). Rather, their patent portfolio exists for “defensive” purposes, i.e. to ensure that they don’t get sued by other companies for violating patents. Hence, for them, it is very important that all the non-trivial ideas that exist in any software that they sell, or plan to sell, should be patented. So they do spend large amounts of money on filing patents, and large amounts of money to defend themselves against patent trolls, but not too much on monitoring unauthorized use of their own patents.

From the point of view of an individual, filing for patents is a very easy process. Each large company which is interested in patents usually has an internal patents filter committee that screens all ideas and decides which ones of them are worth filing. The ones that are selected for filing are usually sent to external lawyers for writing in the proper language and filing.

Another important point to note about patents is that most people are under the impression that a patent is some really earth-shaking, innovative idea. That is not true. I think 99% of patents, especially software patents, are fairly simple ideas which have just a tiny bit of innovation. This is true of my own patents also, as a quick reading of my resume will show.

Q: Bharathealth.com is one of your latest ventures. Sounds very interesting as it is one of its kinds. Share with us about it and how different would Bharathealth be from the other players in the space?

BharatHealth.com is in a very early stage right now. We are planning on creating a platform which allows efficient communications, with rich information, between the various players in the healthcare industry (doctors, patients, service providers). We want to ensure that the right information is available to the right people at the right time and at a right price. The last part is important – our philosophy is that the right price is not zero.

If somebody is not willing to pay for the information, or for that ability to communicate, then it is not worth doing. With that in mind, we are talking to various target customers to figure out which pieces of information they are willing to pay for, and then working to create products to make that happen.

Having a a doctor with 20+ years of experience as a co-founder and CEO ensures that we have a very deep understanding of the subtleties of this business.

Before getting into the answer, I would like to point out that this is a broad generalization, and it is easy to find any number of counter examples, and also it is easy to find any number of people who will disagree with me. Also, all the people I saw in America were either in a very good university, or working for a very good company, whereas the people I’ve interacted with in India come from a much broader spectrum, so obviously, the Indian workforce suffers in comparison. So, I would warn that rather than just reading my statements and then agreeing or disagreeing with them, it would be more useful to think about how best we work towards taking the good points from there and incorporating them here. Anyway, here is what I think:

Q: Working for a corporate, working for a startup and working on your own. What are the differences? Which is more fun and why?

Working for a large company is a very interesting and different challenge.

C.P. Snow said this about government and politicians:

In fact, it was rare for policy to be clearly thought out, though some romantics and worshippers of `great men’ like to think so. Usually it built itself from a thousand small arrangements, ideas, compromises, bits of give-and-take. There was not much which was decisively changed by a human will. Just as a plan for a military campaign does not spring fully-grown from some master general; it arises from a sort of Brownian movement of colonels and majors and captains, and the most the general can do is rationalize it afterwards.

This is true of working in a large company too. There is no clear-cut strategy, and the company really is run by “a thousand small arrangements, ideas, compromises, bits of give-and-take”. Everybody has a different understanding of what the company needs, and what their role in the company is. And some of them even have vested interested. And nobody, including the CEO, has a full picture of what is happening where.

So, it takes a very different set of skills to thrive in an situation like this. (And note, I am not talking about what is normally called “politics”. I think it is quite possible to succeed without playing “dirty politics”, without any back-stabbing, and without compromising your morals. But you still have to understand the various ebbs and flows, to ensure that you are not working on irrelevant things, or going of in a completely pointless direction.

By contrast, working for a startup is much easier. It is clear where the company is headed; everyone is on the same page; your role is clear. But you have to work harder. You cannot get your work done in just 10 hours of effort per week (something that can often be done in a big company).

Having your own startup is somewhere between those two extremes. Since you are the boss, there are a whole lot of responsibilities that are now your headache, from marketing and sales, to handling recalcitrant sweepers, to dealing with fickle customers. You need to decide whether handling all those challenges is something you like to do (and note that technology will be a very small fraction of these challenges).

Q: How, in general, would you rate the quality of Indian blogs? Share your favorite five blogs.

Just like everywhere else in the world, Indian blogs have some really good gems mixed in with a lot of trash. Sturgeon’s law applies.

My favorite Indian blogs are:

Start a blog on a topic that you are really passionate about. When you start blogging, the first few posts will be easy. Then comes the dip, when you won’t feel like posting, it will be difficult to find readers, and impossible to find commentors, and none of the benefits of blogging that you originally imagined appear to be manifesting themselves. You need to get through this phase to be a successful blogger, and the only way that’s going to happen is is you are passionate about the subject. In other words, the right way to approach blogging is to follow what the Gita says,

Color: None. Basically favorite depends upon the context.

Book: Mahabharat (original verses translated to English); the “Travis McGee” series by John D. MacDonald; “Our Dumb Century” from the creators of TheOnion.com

Thanks a lot Navin for taking the time out and giving us this wonderful interview. We got to know a lot about you which we had not known before. Hope our readers enjoyed reading the interview. If you have any questions related to startups, patents or any topic covered in the interview do ask Navin over here and he’ll surely reply. We will be back next week with one more super interview of a super blogger.