Navin is the founder of Pune Tech and is also the man behind Smriti and now Bharathealth – Navin has 9 patents on his name and a dozen more pending. He’s worked with Symantec, Teradata and Quiq before starting up on his own. Lots of people have benefited by the wonderful community Navin has created and which continues to grow under his able guidance and support. Navin was kind enough to give us time to ask him questions related to blogging, his work and so much more. He comes across as a perfectionist and has a lethal combination of a geek and a nice person at heart. 🙂 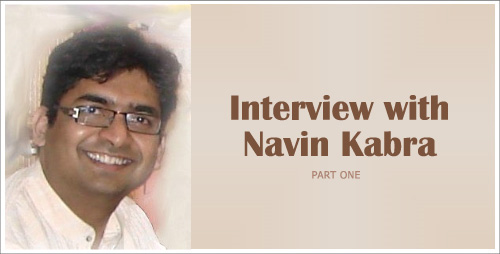 I started blogging in early 2005. At that time, I was simply using it to post my photographs online, with a little bit of description. Unfortunately, I soon had to stop doing that when the photographs and my friends/family in the photographs started getting some undue attention from the web.

The next phase of blogging occurred when I realized that I spend a lot of time reading various interesting, informative and insightful things on the web, which most of my friends don’t know about, but would appreciate knowing. So I started putting short excerpts of the websites and stories that I found interesting on my blog. This was a way for me to get more value out of the random browsing I do on the internet everyday.

The third phase of blogging occurred soon after, when I realized that I could do the same thing within my company (Veritas Software, which is now Symantec Software). I started an internal blog with technology and news, internal and external, directed towards the other employees of the company. That was much appreciated by the readers (i.e. my colleagues at the company) and I realized an important thing about blogging – by doing this I was actually providing a valuable service to the readers of the blog, but at the same time I was benefiting immensely, in terms of my own visibility, and education.

At that time, I decided to re-create the same idea outside the company, for all the techies in Pune. Thus was born PuneTech.com, a blog about technology in Pune.

I have a number of blogs, but I am most active on PuneTech,Â  where I’m trying to bring together in one place all information about interesting software technology in Pune

â€“ the companies, the tech user groups and organizations, the people, and the technologies, the news and the events.

Other than that, I still sporadically blog about interesting things I found on the web at http://smritiweb.com/navin, but that activity has been significantly reduced because of twitter (where I “microblog” from five different accounts for different purposes). I also have a few other blogs focused on my kid’s activites.

I don’t view blogging as something that I must do at some particular frequency (like everyday). I don’t really subscribe to the view that I need to increase my content to increase my readership. I blog when I have something interesting to say. There are a few interesting outcomes as a result: first, my blogs have many more RSS/email subscribers than readers coming directly to the website; second, I probably have significantly lower traffic because of irregularity and low content frequency; but, finally, I think I have much more attentive readers, as a result of only putting out quality content.

Interaction with readers is a very important part of blogging. That is what leads to new connections, finding new and interesting people, and serendipity. But, I do not respond to all the comments I receive. In fact, I don’t even approve all the comments, and I routinely delete irrelevant, inane, or pointless comments. I do have a fairly strong comments policy, and I use that to ensure that the comments on my blog are worth reading for my readers. Far too many blogs on the internet have a great article followed by silly comments that are a waste of the readers time. By contrast, I try to ensure that by and large, the comments on my blog are also worth the readers’ time.

Another interesting phenomenon is of readers asking me for specific help (e.g. in finding some person, or service in Pune, or trying to figure out how to do something), in the comments on some of the articles. I respond to such readers directly, usually with the info they requested, or pointers to places where they can get that info – but then I delete the comment so as to not bother the other readers with an exchange that is not relevant to them. In fact, just based on the frequency of this phenomenon, I started a feature on the blog called “Ask PuneTech“, where readers can directly ask us questions, without having to clutter up the comments stream on other articles.

Q: You played an awesome professional looking April Fool Prank. How did this idea come by and how did you execute it?

In general, I like playing April Fools pranks, and co-incidentally, April also happens to be the anniversary of PuneTech. So I suggested to Amit Paranjape (my co-conspirator in PuneTech) that we should have a prank to commemorate the occasion.

Since a large part of PuneTech is “news”, having a fake news item was the logical choice. After brainstorming a few ideas, we thought that we would do a story on how PuneTech has been acquired by AajTak and now all news on PuneTech would be in the signature “AajTak” style. My wife, Meetu has a bunch of friends in the film industry due to her blog, WOGMA, and the film appreciation course she did – so I asked her whether any of her friends would help create an AajTak style video for PuneTech.

Meetu and her friends loved the idea, and they actually took the idea much further than what I had originally envisioned. After analyzing the idea behind the prank, they came up with a bunch of ideas, including changing the overall idea of the fake news. They spend an insane amount of time and energy on creating it – and that shows in the brilliant quality of the final product. The prank is here, and the story behind the prank is here.

Q: Every Techie’s dream is see India on top of the world in terms of technology. If you were made the head of India’s technology plans, what are the things you would implement and how will it help the people.

Actually, I’d love to see a focus on overhauling the education system. We are a nation of test takers and followers of rules. (To be fair, this is mainly true of our engineers, particularly our software engineers.) I’d like to see a de-emphasizing of exams, and a much higher emphasis on project work. Which, of course, means having to get rid of the centralized, “university”, “government controlled” system of setting syllabus, exams, and evaluation. Which also means that the local professors in each college actually need to be competent. All of these are problems our private sector can easily fix if simply the government gets out of the way.

What that will produce, is a class of engineers who will create products, not services; who will come up with their own ideas, instead of adapting ideas from abroad for Indian conditions; who will be willing to join startups, instead of opting for comfortable jobs with multi-nationals.

Q: Twitter! This is the talk of the blogosphere. We would love to have your views on the recent surge of users in Twitter from India and on the way they are using it?

I don’t really think that Indians are using twitter any differently from the rest of the world, so I will just make some general comments about twitter.

I am a huge fan of twitter. As I mentioned earlier, I haveÂ  five different accounts for different purposes. Because it is so easy to use, and because you have to just write one line, lots of people are using it – even extremely busy people (like CEOs) who don’t have time, for example, to write blogs. Second, since you’ve to say things in 140 characters, you have to be very precise, and to the point – which is great for getting important information across. It avoids the verbal diarrhoea that afflicts the web in general, and the blogosphere in particular (as long as you are selective about whom you follow, stay away from the twitterers who use it to tweet every little inconsequential thought that crosses their minds).

Q: Navin, you are the brain behind Smriti.com, one of the most popular Hindi lyrics site started way back in 1994. Smriti has a different way of compiling the lyrics. Our readers would love to know more about Smriti.com and it’s current status. How much time do you spend on it every month?

Actually, I spend zero time on smriti.com now. I started it in 1994 as a different way of organizing lyrics (which had already been collected together in the form of the the “Itrans Song Book” by an army of volunteers across the Internet). My main contribution was to html-ize it, cross reference everything, and clean up all the inconsistencies. I continued to maintain it until about 1997, after which I stopped working on it altogether, since I was in the process of getting a PhD and a career. Unknown to me, it’s popularity continued to grow for a while, and later, as the SEO types started to take over this space with competing sites, it started to decline.

In the period from 1997 until now, I have actively worked on it only a couple of times. Once, when wogma.com was launched, I added a little section to smriti.com that linked to the reviews of latest Hindi movies. And around late 2008, I had a few months free after I quit my job, so I used that opportunity to overhaul the site, upgrade the database from 2000 songs to 10500 (it only has songs until about 2004), and make unicode version of the devanagari available.

Other than that, I don’t really do anything with the site.

If someone with good php skills, and an understanding of mediawiki (the software that runs wikipedia) were to be interested, I would like to collaborate with them to create a Hindi songs wiki for the internet – where anybody can add and edit the lyrics, and over time, we get a complete, correct, comprehensive, CC-licensed database of songs that is not owned by a private party.

With this answer, we come to the end of the first part of this insightful interview of Navin Kabra. In the second part you willÂ  know Navin’s favorite Indian blogs, his ventures and more about his patents. Do come back next week to read and listen (Gul Panag’s podcast) to more suchÂ  wonderful interviews of Indian Bloggers. You can also hop in to Punetech.com to know the latest tech happenings in Pune. Sayonara for now.

8 Replies to “Interview with Navin Kabra of PuneTech Part 1”