Its a beautiful Monday and after a good weekend we all are back to work :). We know not many would be happy and would be feeling lazy this monday afternoon. To revitalize you and bring a smile in your face we are here with our Perky Tweets.  Tune in to 94.3 FM Radio One tonight and listen to the perky tweets read out by Malini on her show ‘Malini till Midnight’. Read on to find out if your tweet was perky enough to be picked over here and follow us on twitter to know if your tweet would be read out on Radio One tonight. 🙂

If Oprah Winfrey were to marry Deepak Chopra, she would be Oprah Chopra #perkytweets

Early to bed and early to rise makes ur GirlFriend go out with other guys.. – Pune Times #rofl #aawra

Ques: What do you call an intelligent, good looking, sensitive man? Ans: A rumor 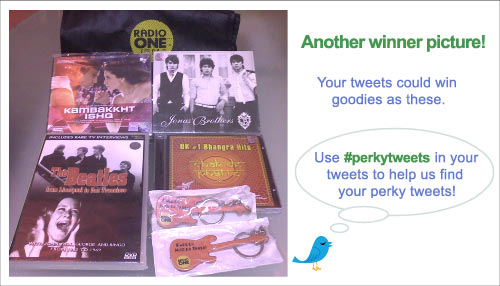 #define reverse swing : when you thought a guy is gay, but he turns out to be straight!!

Why does Salma Hayek need a golden globe award? She already has two..!! Lol. #PJ #crappyjoke

Marketing Specialist :If U love someone set her free If she comes back she has brand loyalty If doesn't, reposition the brand in new market

sania mirza is getting engaged today. http://tinyurl.com/n7wl4q wonder if she'll erm, pull out due to injury later. 😐

Monica bellucci mistook chunky pande to be a valet and even tipped him . Lol lol

RT @hnprashanth Leaving for Gym! LOL 😀 Tweet of the day! I know he'll take a U-Turn and go to Dosa Camp 😛

Bosses make very fast, very accurate mistakes , and then the employee gets accounted for it !! #perkytweets

"Your mom is so fat, Google hasn't ever finished indexing her"

Note to pornographers: If you take a latina and put a bindi on her, that does not in the least make her 'Indian'.

Read the earlier Perky Tweets if you have missed reading them. We warn you, Reading all the Perky Tweets at a stretch would be injurious to your stomach :D. Coming back, if you come across any tweet which you think will bring a smile into a face or perk someone up, do tip us @blogadda or Contact us. You never know, you may end up winning a goodie from Radio One 94.3 and get featured in Malini’s show ‘Malini till Midnight’.