It is the Budget day today! Wonder what Pranabda has in store for us? Will we have to shell out more from our pockets so that we would help Air India recover its losses, only the budget will tell 🙂 . To divert your mind from all this serious talk, we are here with our Perky Tweets to perk you yup this Budget Monday. Tune in to 94.3 FM Radio One tonight and listen to the perky tweets read out by Malini on her show ‘Malini till Midnight’. Read on to find out if your tweet was perky enough to be picked over here and follow us on twitter to know if your tweet would be read out on Radio One tonight. 🙂

ROFL – Seen in today's Mid-day: "StatuEtory Warning: You are now entering UP"

I love this fact "Economics, it is said, is a means of telling people things that they already know in a language they donâ€™t understand" LOL

Had a dilemma last night.. Bandra Worli Sea Link vs. Rakhi Sawant Ka swayamvar —- should I watch The laser show or the who-lays-her show!!

ROFL…MY GOD IS IT HORRENDOUS? RT: @filmfare: Sukanya: Kambakkht Ishq is so bad that it makes Tashan look like Mother India! #movie #review

LMAO at a candidate's resume which says: "Here are my qualifications for you to overlook." 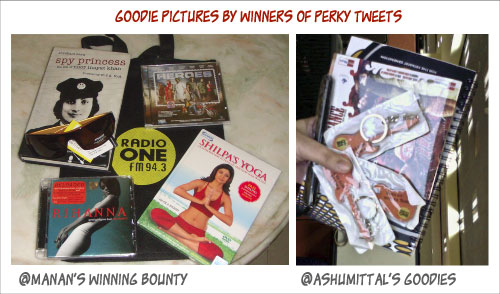 Thanks to @manan and @ashumittal for sending us this pictures 🙂

Menstruation, menopause, mental breakdowns…
Ever notice how many women's problems begin with men?

What did the triangle say to the circle? You're so pointless.

rawfL RT @streetanchor RT @viveksingh: Bumper Sticker on a car in Bandra: Back off! I'm not that kind of car. #repeal377

RT via @meerasapra What did the frog order at McDonalds? French Flies and Diet Croak

By the way, hope you have not missed reading the interview which has created ripples in the Indian Blogosphere. Skip over to read interview with Indyeah. Coming back, if you come across any tweet which you think will bring a smile into a face or perk someone up, do tip us @blogadda or Contact us. You never know, you may end up winning a goodie from Radio One 94.3 and get featured in Malini’s show ‘Malini till Midnight’.