He has done his engineering from REC and his MBA from IIM-A. One of the early bloggers from India, he also writes for mainstream media and has written a book to be published early next year. His post about ‘Travails of Single South Indian Men of Conservative Upbringing piece’ is talked about even now. He is used to taking other people’s interview. For a change we reverse the roles and interview  Sidin ‘Sunny’ Vadukut of Domain Maximus . We present to you the second part of this very witty interview. If you haven’t read the first part do read it now! 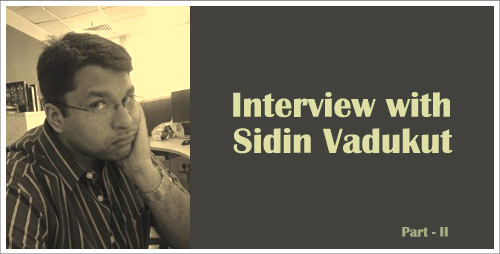 A: Tough question. I’ve rewritten this answer four times now. Okay let me put it this way. Our random, unthemed, general interest blogs are excellent. World class. But we simply don’t have enough good themed ones. With the number of talented writers out there we should have more Munity type multi-author blogs for politics, books, culture and so on. Where the posts rise above mere opinion pieces and have actual reporting and research in them. Would be awesome if we could have our own Talking Points Memo, Daily Kos etc. etc.

Also it would be awesome if we could have good sports blogs. Especially for cricket. For instance I have always wished we could have perhaps an existing cricket player who could write about his experiences playing at the highest level. And if he was afraid of retribution he could even do this anonymously under a pseudonym like “Artificial Cricket Chronicler” or something like that. Good idea no? Thanks.

(Editor – Sidin, we have some good cricket blogs at Dashboard for IPL T20 and ICC World Twenty20 )

A: ALERT! CHEESY SENTIMENTAL PROSE AHEAD!
Once every year, on average, I get an email from someone who says that reading some of the humour on my blog helped them cope with a period of personal difficulty. Sometimes this turmoil is at work but most times in their homes. And then they tell me how much the blog helped them to laugh and cope with this.

This is WITHOUT DOUBT the most gratifying aspect of Domain Maximus. Not being pompous or anything. But laughing at things is a peculiarly under-popular pastime. All of us should be doing this more often. Instead of throwing shoes and blowing up shit.

Q: Where and Why do you enjoy writing the most @blog @Mainstream media?

I take both very seriously though. I make no bones about the fact that I am working on a journalistic career that I personally benchmark against the best magazine writers in the world. Which means it is a long multi-year process. I am learning and working very hard on it. This entails obsessing over facts, language, grammar, narrative and the reader’s profile. And then seeing all of it ripped to bits by editors. And then there are the deadlines. Tough, but entirely fulfilling when a story hums off the page.
Blogging keeps my funny writing sharp and I see that being much closer to the books I want to write. I enjoy both styles equally. Both are important to me.

Q: Sidin, you had written ‘Travails of Single South Indian Men of Conservative Upbringing piece’ which is talked about even now 🙂 .Who or What was the inspiration behind that piece?

A: You won’t believe this but someone just walked up to me in the office and said: “Hey! Dev Chopra!”. That post made me a writer, gave me confidence, a genre and finally gave  me a career. (Though personally I don’t think it is the best post on DM by a long margin. There are several better posts. I think.). The inspiration for the post came from a sad period in my life while I was an MBA summer intern in Mumbai. Many things in life had gone up in smoke and my friends decided that the best way to help me cope was to take me to Insomnia, Rock Bottom, Ghetto and other such spermicidally loud disco places in Mumbai.

I had many pints of Fosters and much fun. But I didn’t fit in at all. And then I decided to observe rather than sulk. One day I was sitting at Mackichan Hall, a student dorm where we were put up during the internship, and created this stand-up comedy act in my head about how South Indian guys just had names that didn’t get them any. I performed the stand-up act for a bunch of guys later that evening.

Then that night I wrote it up and posted it on the blog from this net-café on the road that leads from Marine Drive past Mackichan Hall to Grant Road station area. Somebody in Procter and Gamble Singapore, I think, mass forwarded it and the rest is traffic madness.

Q: You are an REC and an IIM graduate. What lured you away from the lucrative MNC’s and Silicon Valley to journalism?

A: I knew I could write. The blog validated that hypothesis. I knew I could probably do it for a living. And I knew that if my writing career blew up into pieces I could still

use my degrees to wheedle into some company as at least an intern. So when I was young and broke enough to take the risk, I took it with both hands.

During our convocation ceremony at IIMA, the chief guest Raghuram Rajan, then of the World Bank, told us something that I will never forget. He said the IIM degree ensures that you will never starve. Now do whatever you think makes sense to you. Try whatever you want to.

So did I waste that degree from IIM? I don’t think so. In fact not even the IIMA tells you that you should use the diploma to consult, market, sell or bank. “Any organized activity” I think is the refrain. I have more than paid back my subsidies in the form of tax. I think I do a clean, honest job of being a journalist. And I use my degrees to research, structure and plan out my stories.

In fact if all us did what we were best at, I am pretty sure GDP would grow at a pretty Nifty pace. (Ha!)

Q: IPL and Indian elections, though held at the same time were both victorious and media played a big role in both of them. The world was watching both the events and India seemed to pull in both of them correctly. Can you share your detailed views on these two very large events?

A: I cannot. But I can share this recipe for using any cold cut type meat you may have in the fridge. Chop into strips, throw into a little bowl with a little olive oil, black pepper, parsley and a few drops of honey. Give it an almighty shake or two. Now Microwave suitably. Enjoy awesomeness.
Ugh. You insist I commentate on media is it? Ok. Damn. Fine.

As Shashi Tharoor always mentions India is a nice, ‘soft’ state. Most times we need to give people a reason to dislike us. (Unless, of course, you are from the ENEMY NATION ACROSS THE BORDER. Those Bhutanese I tell you.)

So things like our elections are really an amazing feel good story for everybody. We are an island of comparative respectability in what is a very fragile part of the world.

So as long as it happens without incident media globally will cover our elections well. The unfractured mandate was an added bonus. We may not be China yet, but a stable, progressive India is a gentle, well-mannered tide that lifts all boats.

Yes, Narendra Modi has been and will always be portrayed as a pogrom instigator. That is because media in general is notoriously uncomfortable with gray areas, middle ground and benefit of the doubt calls. People are either good or bad. And sometime both in the duration of one televised debate.

I am by no means an expert on these things. But I also think that the Obama-McCain race may have been detrimental to our own media coverage of our elections. It may have pushed back coverage to personality-based reporting from what was beginning to become issue-based.

Ultimately media will produce what people consume. So when consumers ask for good material, media outlets will oblige. The real challenge, however, is now. A new government is in place, it has immense power to reform and rule. Can the media step up and be the real aam aadmi’s watchdog?I have a feeling it will slowly.

Q: Can you give our readers an all exclusive update about your book which is going to be launched by penguin publications? 🙂

A: The manuscript was completed in March and submitted to Penguin. They are currently working on it. I expect some minor re-writing. The title has been decided. And I expect to see it on stands latest by very early next year.

I am not at liberty to disclose anything. But it is a humour novel, it is in a style very familiar to regular readers of the blog and it should approx. take around 6 hours to finish.Much more in time. I promise.

Color: The lovely light brown of fresh humus with a hint of olive oil.

Book: Too many. Can I give four? Netherland, Notes From A Small Island, Gorky Park, Roseanna

Time of Day: 11 PM and later. I am totally a night person.

Thank you Sidin for your detalied answers. It was our pleasure interviewing you and we are sure our readers would have felt the pleasure reading the answers. It was for the first time that we had to publish an interview in two parts 🙂 . Friends, do let us know if you liked the interview and what would you like to see in the future at BlogAdda. Your feedback is very valuable.

Interview with Sidin Vadukut – Part I