Wordcamp Delhi, India’s first Wordcamp started off with a bang. It was one of the most well organized events. The conference hall was spacious enough to accommodate the huge crowd that turned up for the event.

They were surely not disappointed as the event started off with the keynote by Om Malik of GigaOm. He told us how he started as a journalist and moved on to GigaOm. The speech was really inspiring as he explained how he grew at a time when internet awareness was little.

The keynote set the trend for some very interactive sessions to come by and the session by Shreyas of Radioverve was one of them. It was a session which made us realize what all we can do with WordPress. Radioverve is an very interesting site which helps in promoting good but unknown music of various artists from all over India.

The third session’s theme was ‘How to get started after installing WordPress‘ by Abhijeet Mukherjee of JeetBlog. His session gave us tips to be taken care of after WordPress installation. This session was long and had good content as well.

Then came the most awaited session for the day. Yes, you guessed it right, Matt’s session was next.Â  He set the mood by telling us about his visits to various places in India especially the Taj Mahal! He has an amazing sense of humour. He talked to us about the history of WordPress. He also gave us a few hints on what we can expect in the future versions of WordPress. The sessions was very interactive and he entertained all the questions put to him in his usual humourous self. 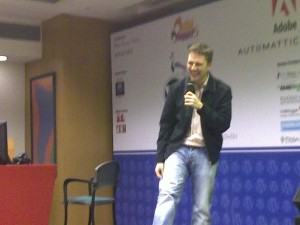 A very important session came up next. Can you guess what it was? Lunch time!! Yes for any event to be called a success, the quality of food plays a very important role. The lunch provided to us by Adobe was Sumptuous and very tasty. We enjoyed it!

The Post Lunch session was started by Abhinav Gulyani on ‘SEO optimization on WordPress‘. The twitterati crowd was the most active during this session. We felt the content was good but Abhinav suffered from first timer presenter hiccups but we must also say that he handled it very well and did not let it show in his actions.

The session after Abhinav’s session was “How to optimize Adsense in your Blog’ by Amit Agarwal. His session was all about how to earn using adsense in your blog and the various ways to achieve that. His tips were very well received by the audience and the session was very interactive. We all know how much experience Amit has in blogging and everyone was absolute attentive while he was speaking.

We had the quizÂ  anchored by Ankur to lighten up the proceedings. The questions were well researched and the only letdown was the lack of prizes for the event 😉 .

The last event for the day was an open house discussion with Matt and Om Malik where they were flooded with questions and the answers by them were the best from the blogosphere. This event ended the first day of India’s First WordCamp in Delhi.

The Second day at event started off with a Ankesh Kothari’s session on ‘How to turn Blogs into business’. This session gave the bloggers who are looking for income through their blogs a brief idea on how to go about it. Ankesh’s session was interesting and informative as well

The Second session for the day was one of the most intereactive sessions of the WordCamp and we wished it never ended. The session was hosted by Pavan Duggal (Advocate Supreme Court of India). It covered all the legal aspects a Internet user faces in India. We had questions pouring in and were never ending until we realized after our stomach started complaining.

It was lunch time again. The standards set on the first day for food was maintained on the second day as well.

The first session after the lunch was by an Adobe representative on Adobe AIR and its applications. The content was very interesting but the presentation lacked the spice. The content and future of Adobe AIR looks very promising though. The multiplatform compatibility is an awesome feature and we look forward to using it.

Matt gave us a glimpse of the new design of his blog. It’s definitely better than what it is now! ;).

There was also an contest which was scheduled after this session wherein the bloggers were given a piece of paper and told to list the features they would like to see in future in WordPress. Matt started reading each and every suggestion and gave us the feedback for the same. After going through all the features, he announced the winners of the contest and they got some very interesting prizes. The winners were Mitesh Ashar, Ankur and Shankar Bakshi. The Prizes were a calculator which operates using water (Mitesh, are you sure?) and a coffee mug which changes its colours when it is filled.

The last but second session for the day was Watblog Panel discussion with the topic as ‘Will Blogs replace Mainstream Media?’. The panelists were Mr Sanjay Sidhwani, Mr Madhavan (Associate editor HT), Om Malik, Matt Muellenweg. The panel again was very interesting and the conversation was mostly dominated by Mr Madhavan and Mr Om Malik. It was a superb discussion and we got a idea about what is in store for us 5 years down the line and that is BLOGS!

The last session for the day was conducted by Mr Pavan Duggal again. In spite of being the last session for the day people were very enthusiastic and tells us how exciting the wordcamp sessions were. Pavan Duggal’s session was again very interactive and by the end of session we knew about the laws related to Indian IT industry. This was the end of all the sessions in India’s first WordCanp.

The Thanksgiving speech was given by Priyanka aka Twilightfairy where she alongwith Matt and Om gave away the mementos to all the speakers. Matt then took the centrestage and told us how much he enjoyed the event. there was a group photo session to end the event. Priyanka comes across as a very nice person and we were amazed at the time-keeping she did. Wonderful job. Mayank, Garima, Sameer, Sanjay and other organisers were very courteous and did a good job for the success of the event.

A Special thanks to Delhi Bloggers Bloc, Blog Design Studio and Mojo360 alongwith Adobe for organizing such a huge event without any hiccups. It takes a lot of effort and dedication for the same and we truly appreciate that.

8 Replies to “Wordcamp Delhi. What an event it was!!”