Hi lovelies, it’s Monday again! We know you wouldn’t want to hear this word, as the weekend that just went by was awesome. We are again back to our monotonous work life. To cheer you up from this usual routine, we are here to serve you with this week’s funniest tweets. Laugh out loud and roll down your chair with these best #PerkyTweets only at BlogAdda! 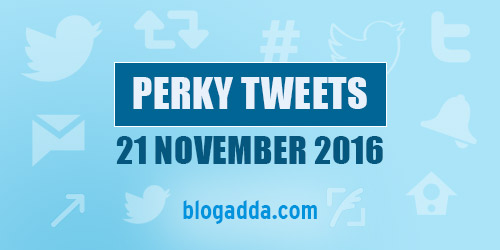 To all "Sonam Gupta". Not all of you are "bewafa". I can understand 😂 #PerkyTweets @blogadda #sonamguptabewafahai #meme

Is 'cash in hand' an asset or liability??

Procastination is the art of keeping up with 'yesterday'…..
untill you try #parenting!#PerkyTweets

Hey u, I've got two news for ya! good news is no line in ATM, n Bad news is no cash in ATM!!! #PerkyTweets #SurgicalStrikeonBlackMoney

Pappu went to 'SBI' few days back, poor boy, he seemed illiterate as was able to read 'Swiss Bank of India' 😉!!!#PerkyTweets #BlackMoney

Enjoy the visual treat of this week’s Perky Tweets only at our YouTube channel!