Perk up your ears, for it’s #PerkyTweets time! Once again, we have hunted in the vast expanses of Twitter and discovered funny, point blank and unique tweets for you. These fine, designer, exclusive 140 characters are curated just for BlogAdda readers. So read and enjoy! Think you can make people giggle, chuckle and more with your tweets? Submit your tweets to us on this link! 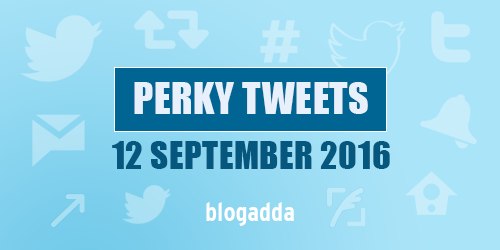 Female Rat : Why are you not coming in Ganesh Puja?

The sookha poori is the ultimate unsung hero of the Indian chaat food scene.

@blogadda
Yogeshwar Dutt must get a Nobel Prize in physics for going back in time and winning a Silver medal in 2012 Olympics.#PerkyTweets

“Coldplay tickets are too expensive”

“If you do charity work, they’re free”

Every time I see Indian men tweeting of “women are always after money” I imagine them sitting on top of all the dowry they got.

That’s the khazaana that we got for you this time. Until next time, keep reading these and LOL over them. Have a great tweet? Submit it by tagging @blogadda in your tweets with the hashtag #PerkyTweets!