It is not everyday that you see two Gods in conversation. But #WIN15 wasn’t a normal day, it was a day when the best names in the digital industry came together to take blogging in India to the next level. One such conversation was between Twitter Gods Anaggh Desai and Jhunjhunwala, aka Sir Sri Sri Aditya Magal on the #WIN15 stage. 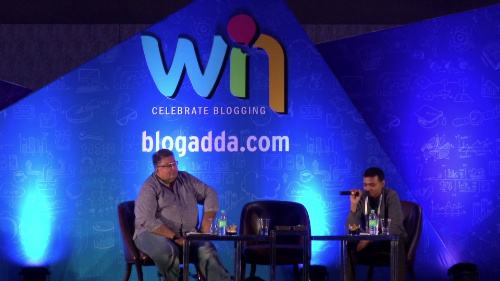 The session was called ‘The Gods Must Be Crazy’, and true to the name, both Anaggh and Aditya were at their candid best, talking about social media and blogging in front of a very entertained audience. Aditya Magal talked about how blogging and social media helped him fulfil his childhood dream of becoming an author with his book ‘How To Become A Billionaire By Selling Nothing’, but also warned that if your only thought is of earning money, then writing a book is not for you.

Anaggh, being God, confessed that he had never fallen victim to online trolling in all his years of being on Twitter. He also stressed the fact that our online and offline lives are intertwined, negating the need to put up a dividing wall between the two. The conversation also veered to how brands viewed influencers and their value, but we’ll let you watch the video and decide the takeaways from this talk for yourself.

What did you think of the video? Tell us in the comments section below, and don’t forget to subscribe to BlogAdda’s YouTube channel for more such divine videos!

One Reply to “Watch Anaggh Desai and Aditya Magal in conversation at #WIN15!”