If you need an introduction to Kanan Gill, we request you to come out from your hiding place under the rock or check your internet connection. Or maybe we’re being too lazy to introduce one of the cutest…we mean most talented guys in India’s ‘humour industry’. Kanan came, saw horrible movies and conquered YouTube with his ‘Pretentious Movie Reviews‘ series.

He is also a known face in other YouTube videos, the stand up circuit and young girls’ mobile wallpapers. So without getting too carried away with the introduction, we take you straightaway to BlogAdda‘s interview with the dimpled Jack of all things humourous – Kanan Gill.
*Please note the straightfaced picture below to give this interview an aura of seriousness. 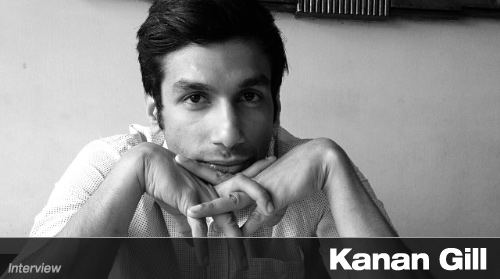 Q. Starting from the beginning, how did you come into the world of stand up comedy? When did you first realize that you could make people laugh?

I think I always needed attention in one way or another. I discovered I had a knack for writing when I was young, so I used to write stories mostly to impress my English teachers and get that coveted prize for English. (I doubt anyone coveted it, except me.) Writing funny stories was an extension of that, because I enjoyed reading humour the most. Write what you’d like to read, they say. I guess I really discovered I could make people laugh in high school. I don’t know what changed, I just wanted to be the funny guy then.

Q. You’ve said in a video that Pretentious Movie Reviews was born out of too much time, too less money and a late night idea. But what was the thought behind reviewing long lost badly made movies?

The style of comedy I enjoy the most is the kind that doesn’t make sense. A whole branch, for me, is just things that are not helpful. Reviewing a movie that came out 30 years ago that everyone’s forgotten about is a huge extension of that.

Q. Did you think that Pretentious Movie Reviews, especially the first attempt would take off as it did?

I know it sounds insincere when people say this-but I really had no idea. I knew YouTube was going to be important, I just didn’t expect it to be so important so quickly, and I didn’t think movie reviews would be the thing that took off.

Q. What would you have done if Pretentious Movie Reviews hadn’t worked?

A bunch of different kinds of videos, which we’re still doing anyway. Pretentious Movie Reviews taking off just delayed all the other videos.

Q. Nowadays we see a lot of street interviews by many YouTube channels. Do you think you sparked off this trend or were you inspired by someone?

Street interviews aren’t new. They’ve been on the Jay Leno show, Jimmy Kimmel and on YouTube popularised by KassemG. So no one can really call the idea their own. As far as starting the trend in India goes, I might have had something to do with that. It’s really nothing to boast about.

Q. From doing Street Interviews to being interviewed by news channels, Youtube channels, and of course BlogAdda, how has the journey been?

I really haven’t had time to step back and look at it. I think I need to do that now. It’s been a blur and the shift doesn’t seem real when you’re caught up with so many things. I’m just glad it’s always been fun.

Q. You work in a lot of formats in humour – various types of videos, stand up and hosting. Which is your favorite format to perform in and why?

Honestly it shifts a lot. When I used to work in IT, I loved stand up with all my heart. When I quit and was doing stand up, I started liking videos more.
Now I’m having the most fun doing improv. It’ll probably be something else next month. Accounting? We’ll have to see.

Q. You’ve been a part of many collaborations – with Biswa, Kenneth and even Scherezade Shroff. How important do you think working together is in comedy or can someone make it on their own?

I generally prefer writing alone, but some things always make more sense in a group. Biswa and I workshop material together, Kenny and I do a live sketch show together, and we’re all friends and part of the same comic community. So working together on some videos just made sense. Collaboration can help you get a different perspective or fine tune your own perspective with an external input. I think collaboration works as long as the group is small.

Q. Who did you look up to when you first started off? Any artist who inspires/ motivates you currently?

I wanted to be on YouTube ever since I started watching YouTube videos. It took a long time to overcome the fear of putting yourself out there to such an extent. I’ve been a fan of YouTubers like Nigahiga, JusReign and a variety of sketch channels like BriTanick, ThoseArentMuskets, etc.

Q. Which has been the best compliment you’ve received till now – could be from a fan, YouTube comment, or a peer.

I forget compliments too quickly, I fear. This is my dad’s philosophy.

Q. Which has been the worst criticism you’ve faced? Any moment when you felt you were not cut out for this?

I’ve felt like I’m not cut out for it too many times. I’m given to serious bouts of anxiety. So I’ve often caught myself worrying myself into a wreck. ‘Is how life is going to be now? How long can I do this?’ But someone sensible always comes and puts me straight. The answer more often than not is ‘Don’t be an idiot, Kanan’.

Q. You’ve forayed into hosting and ahem…television commercials. Is it a conscious attempt to diversify or you take up opportunities as and when they fly at you?

I’ve clarified this extensively in stand up. I have a big joke about it, maybe you’ll see it at a show. That commercial was not something I wanted to do, but circumstances were such at the time that I had to do it. I’ve said no to plenty of ads, they just aren’t something I’m interested in doing. That one just turned out to be funny.

Q. Why would a beefcake like you name his blog ‘Cheesecake’?

Q. Is blogging a medium that lends itself well to humour? There are a lot of humour blogs around but you don’t seem too keen on it. Any particular reason why?

I’ve had a blog for a while honestly. I love humour blogging. The blogger/blogspot platform is notoriously un-shareable. It’s really hard to discover good content and to follow it. So while I loved blogging, it got shifted to the sidelines once I started working. My blog never got much attention either way, so it wasn’t a huge sacrifice. I want to bring it back, but I’m thinking about choosing a different platform.

Q. What are the celebrity moments that you’ve had till now? Moments when you were recognized, lunged at or just generally made to feel very famous.

There’s no way to answer this question without sounding like a douche. I will pass.

Q. What would Kanan Gill be doing in a world where YouTube (or other video sharing sites) didn’t exist?

Only stand up then. I would be fine with just that. More writing as well, probably.

Q. Do you think an internet celebrity can sustain being just that in the long run? Does there come a time when you have to switch channels or *dramatic music* face extinction?

I’m okay with all of this going away. I’ve made my peace with it, it’s been fun. The point is that life doesn’t snap back to exactly how it was before. You meet a lot of people and opportunities open up. I’m not worried. I’ll do something.

Q. What do you do in your free time? What is your personal life like?

I waste a lot of time. I play a few video games and read a lot of boring books. I’m not very social. I have a few friends and I’m always bugging some subset of them.

Q. Are stand up artists always expected to be ‘ON’? Be funny even when not on stage/on camera? Even personally, do you have to keep your antenna up to look out for new fodder for your jokes?

Some people always expect you to be funny, but there are a lot of times where you just won’t be. It’s fun to make people laugh off stage if it doesn’t feel like a strain. I used to constantly worry about not seeming boring earlier. I’m okay being boring now. It helps maintain my sanity.

Q. What are your future plans regarding your YouTube channel, blog and stand up career?

I don’t want to give anything away really, but there will be many more things. New things.

Q. You have a large female fan following, who are assumingly as crazy for your humour as they are for your charm. What do you feel about it?

Honestly, I’m just surprised. I’m always happy that someone appreciates my work. I’m not vain about it though. This isn’t like being a rockstar; comedians don’t get groupies. Or they shouldn’t at least.

Q. There has been a lot of talk about freedom of speech, especially when it comes to offending someone, in recent times. What is your take on the issue?

Everything that’s okay to talk about, is okay to joke about. If you’re offended by something, that’s great. It means you have an opinion and you just realised what it was. But your offence needs to end there. The law doesn’t need to come into this picture in any way. To everyone who believes that the ‘youth’ is somehow being ‘led astray by vulgarity’, I would like to say, have faith in the youth. The youth are smarter than you think and don’t need you covering their eyes and ears. They’ll do the right thing.

Q. Has there been any time when you’ve tried to be Pretentious?

Constantly. I’ve suffered through so many books that I hated the entire time I was reading them, but endured the torture because they are ‘smart people books’. I’m really pretentious. Haha.

I find humour in… horrible places.
The stand up scene in India is… going to be huge.
One artist whose career I’d like to emulate… (this changes too often)
When I feel like laughing, I… explode into my weird inhale-laugh.
I would die happy if I… was able to accomplish half the things I want

We hope you enjoyed reading this interview with Kanan, because we certainly loved it. Love it? Hate it? The comments section is all yours!

14 Replies to “An Interview with Kanan Gill”