According to you, what is Indian Fiction? Have your ever noticed that most of the times Indian Fiction revolves around two things: relationships and love? Why? Our Premium Blogger shares with us the reasons behind this in an awesome post by Deboshree Bhattarcharjee. 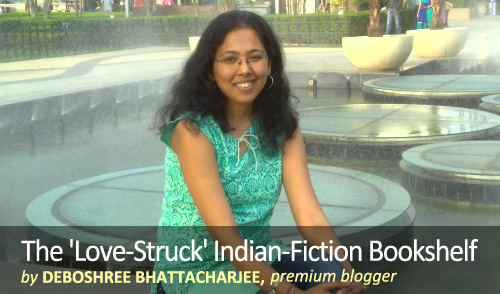 Ever wondered why the Indian Fiction shelf in book stores overflows with love, girlfriends and boyfriends? Here’s presenting a case analysis which attempts to understand why.

Picture this. You walk into a bookstore – squeaky clean, air-conditioned and alive with the instrumental strands of classic Hindi film-music. As you gaze appreciatively through the bestsellers and the pretty coffee-table books, you spot the Indian-Fiction bookshelf. Instantly, your thesaurus for ‘love’ shoots up. There are books about love that happened at work, in Engineering and Management colleges, in school and when the neighbour was watering the plants. This love, by the by, comes with interesting pictures of hearts and candies across the cover. Precisely therefore, you collide head-on with the “Love enters Everywhere” phenomenon. What’s more, it enters with a bagful of corny lines, lovemaking advances and punctuation errors.

To trace the debatable origins of the phenomenon, let us look at Mr. Chetan Bhagat and his first release. IIT, IIM, Writer – the kind of profile that, in golden letters, features in an average Indian Mom’s dream. Plus, his book is seemingly about the very place her child is studying hard to get into!  All is well until Mom discovers a couple making out somewhere towards the end of the tale. Apparently, the characters also use abusive language which her child, growing up on highbrow AXN movies, ‘doesn’t have a clue to’. The literary work changes hands and is now with the elder brother.

In line with his ‘Dope and Pink Floyd’ generation – or as the grey-haired would like to call it – the book hits the perfect chord. From brother to friend to several more the world over, Five Point Someone does something unprecedented. With the power of its ‘colloquialism’, it draws people in thousands. These people don’t just read, they want to give the writing a shot. Since writing a book was about sharing college experiences and you didn’t need fancy thumb rules that authors-in-ethnic-jholas swore by, why not write a book of your own? This gave birth to the era of ‘Me Toos’.

At the risk of sounding deprecating, the ‘Me Toos’ were experienced at jumping on the college-romance bandwagon. Make sure the college hero lusts after a college heroine and his life nosedives. Throw in a few smooches and rolls in the hay behind the hostel and voila, your book is up on the Indian Fiction bookshelf! When you start running out of cover design templates, just pick some red hearts and pink candies.

It would be unfair to let the onus of an era rest entirely on Mr. Bhagat’s shoulders. As also it would be to stereotype all the titles in this, err, series. What he penned down as a possibly harmless, even one-off tale snowballed into the ‘Love Enters Everywhere’ phenomenon. If only the proponents had gone easier on the theme – the skimpy girls less pea-brained and the Engineering guys less leering, for instance – the assortment on the shelves would have painted a nobler picture.

Bookstore owners tell me that the ‘Engineering’ books have now slowed down on revenue. People are shifting to literature that doesn’t smell of skimpy girls and lusty guys drowning their college woes in booze. Sex, of course, may never leave the shelves. But the new reader is increasingly averse to the bad aftertaste that badly written sex leaves behind.

So, is the end of the ‘Love Enters Everywhere’ phenomenon around the corner? Well, what sells is what several end up producing. Mass producing, for that matter. And then, when quality goes to the dogs and variety goes for a toss, it eventually stops selling.