After the awesome first part where Karthik spoke about ITwoFS, Milliblog and Music, we now present to you part two of the interview. In this part, we explore the other side of Karthik (the more serious one). We manage to get all the #socialmedia and Brand marketing gyaan from him. 🙂 Read how Karthik speaks about Social Media acceptance in India, Brand’s attitude towards Indian Bloggers, his work journey and his favourite blogs. 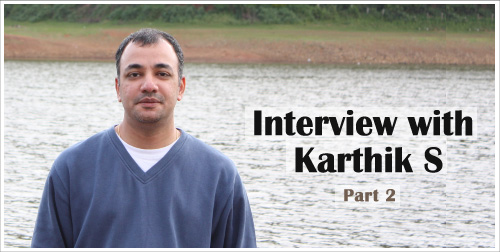 Q: Bollywood and Internet Marketing – You have posted your thoughts on film promotions that use the internet. As a movie buff, What do you think is working and missing?

A: Getting massive number of followers on Twitter and Facebook are not a problem these days. They can be done with advertising and offering freebies. What is needed is to plan the outreach much in advance and to target the right people so that on a Friday, they promote the film along with your posters and TV ads. Imagine a 1,000+ people gang talking positively about your film on a Friday and the viral effect it can have with their followers and friends – it is far more credible than the producer’s promotion!

Such a crowd online would also help counter negative reviews from critics which happens these days on Friday or even after a preview show on a thursday. But the engagement needs to start much before the film’s release, so that a loyal following is built based on the strength of the content (the film, music etc.) and not only on star value. Finally, what sells is content.

I see quite a few films doing a great job online, on Facebook especially – Delhi 6 team did it well and now Aisha team is handling it well. My only concern is that these are film-based communities and die after the film is released. That is not a major issue, but what happens to the cost and effort of gathering so many people to an online destination after the film is released. There has to be a way to make these single film communities as part of a larger effort – may be a production-house owned community or a star-owned community, so that the community lives even after a movie releases and vanishes.

Q: About a year back, you had posted your views on ‘Social media acceptance in India’. What has and will change in the coming years according to you?

A: Social media acceptance is still a dicey issue in India. Most brands are used to controlled messaging and talking down to target audience. That social media is conversational and needs a change of approach is still not a priority – it is still about using conventional promotional material online. Even in case of brand owned properties, clients continue to seek numbers – in terms of followers or friends as the metric. Even if we have 100 fans on Facebook, if they are highly engaged, that could be an excellent metric, but having grown accustomed to massive numbers via advertising ‘reach’, the attitude shift to look at relatively smaller, better engaged fans is still missing.

I do agree that scaling social media interaction, particularly making it personal and customized requires a lot of time and effort, but done well, it can move the needle much more effectively than traditional advertising.

Q: One of your very recent posts spoke about brand’s attitude towards the Indian Bloggers. Is this the right attitude? As a head of a digital agency, how will your approach be? Do you see the influence of Indian Bloggers rising and what are the trends you predict?

A: I’ve always maintained that social media is about people. Brands are incidental to the discussion online, about and by people. If brands can agree and understand this, then it’d be thinking about the all important, ‘What’s in it for people?’ from the perspective of bloggers, tweeters etc.

That said, I really do not see a thriving blogging scene in India. There are many bloggers that I follow, but if I were allowed to say this, very few of them take a stand on something and articulate it well. I used to complain about poor use of English, but it is not just that alone. The basic idea of a blog is that it is a form of expression and we have very few people expressing themselves in interesting ways in English, beyond films and music. Some of the regional language blogs perhaps offer more original and interesting views on many topics compared to English blogs. Amit Agarwal’s blogging directory is a great start to identify the good blogs from India. Plus, of course, sites like BlogAdda help unearth and highlight blogs on a variety of topics.

Q: You started your career in ‘Corporate Communications’ and now head the Digital Strategy at Edelman India. How has the journey been till now? Can you share with us the nice moments and learnings from all this years?

A: I joined corporate communications only to deal with my persistent stammering head-on. I felt that joining a communication related field is the only way out for a stammering introvert like me, who used to shudder at the prospect of reading out a passage from the text book while in school. From the client-side corporate communications, to the agency-side public relations, it was a seamless move since the nature of work is largely similar. My digital role is vastly different, however, and I grabbed it by being interested in it and doggedly pursuing it.

While at Text 100 public relations, I had the opportunity to learn about online tools and observe social media dynamics. I extended it by creating a personal blog on the topic (beastoftraal) and a Twitter profile too, besides doing it for select clients. It worked well and I was sure that my approach made sense, personally and for clients, because it was not based on any jargon, but on common sense. Having done that, it made sense to get into it full time and joined Edelman to head the digital division in India.

In a sense, what I’m doing right now seems like the real ‘public relations’, since it was media relations that is predominantly associated with public relations in India. On social media, we now deal with the actual public, on behalf of clients!

A: While it is important for a blogger to interact with his commenters, I do it only if it interests me. If someone agrees to a point of view I’ve blogged about I don’t see a pressing need to continue that discussion, but if I notice a comment opposing my view and that too in an interestingly worded argument, I get excited. I love to see a good argument and would gladly agree to disagree or explain my stand further, no matter how abrasive the commenter is!

The interesting thing is that if you take a stand in India, for or against anything, you’re labelled ‘biased’. So, if I review a Himesh Reshammiya soundtrack and trash it, I’m usually accused of being anti-Himesh! I don’t even know that man to be anti-Himesh – it is always that particular soundtrack that I’m opining about. Comments which accuse the author of bias are not worth responding to, unless it has been presented in a convincing argument.

A: A discussion in the comments section! There’s nothing more gratifying to see and take part in a lively discussion about something you’ve, as a blogger, opined about. This is far more gratifying than tracking the number of views to a blog, since it shows that people who commented have got more interested in it more than merely viewing it passively!

A: Have addressed in one of the earlier questions. I like and appreciate blogs that take a stand and have an opinion on the topic they address. From that perspective, I look forward to posts by Lakshmipathy Bhatt and Manu Prasad (Ed: Read his interview). In the entertainment space, I always look forward to Baradwaj Rangan’s film reviews and assorted ramblings – more for the language, and of course for the content. I love the way he articulates his views.

In terms of celebrities, I look forward to playback singer Chinmayi’s posts on her WhatToNameIt blog (Ed.: Read her interview with BlogAdda) – she takes a stand boldly and displays a rarely honest interest in everything around her. Plus, the fact that she juggles so many things – playback singing, TV show hosting and a company that does translation services – is hugely inspiring. Amit Agarwal and his Labnol is a perennial inspiration and part of my daily read. There are many more that I follow regularly via RSS feeds, of course.

A: Unless you have a point of view on everything or at least a few specific areas, or can be interesting while holding a conversation on a topic â€“ don’t. Else, you’ll lose interest in the same speed as you started since very few people would be reading your posts.

If you do start a blog, then plan on how you’ll sustain it. Most importantly, how will you promote it, within context, to the right audience online? Plan those well in advance.

A: I have Google Adsense in Milliblog and ItwoFS and some revenue out of them that are transferred to World Vision. Revenue is clearly not why I blog!

Movie: Many! Top of mind…Roberto Benigni’s Life is Beautiful and the Catalan-language telefilm, Tempus Fugit.

Book: Douglas Adams’ The Hitchhikers Guide To The Galaxy.

Merci Monsieur Karthik! Readers, what do you think? How many of you scanned through every post of ITwoFS after reading the first part? Let us know. 🙂 If you have any questions for Karthik, do not hesitate to ask him over here. 🙂

If you have missed, do read the part one of the interview.