What a week it has been at BlogAdda. We started the week by launching ‘The Best of Indian CEO blogs’ where we have the dashboard of the best Indian CEO blogs. It was followed by the ‘The Best of ICC World Twenty20‘, The Icing on the cake was our CEO Mr Nirav Sanghavi being invited to write a guest post for America.gov.We were elated when he was invited by America.gov to write a guest post for them.Â  Social Media and the Indian Elections was the appropriate choice after all we were the first one’s to introduce the Social Media Aggregator on Indian Elections. A few guidelines for the post were provided and lo, now it is published!

Here is a snapshot of the post featured at America.gov and here is where you can read. 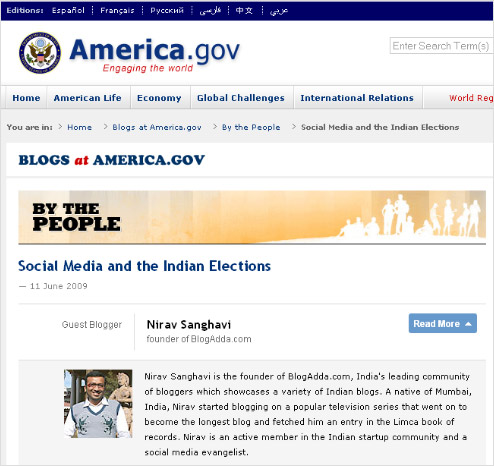 Nirav Sanghavi adds: Thank you to all our friends out here. Without such an active community and a great response, we would not have been able to do what we do now. Thank you readers! Thanks to America.gov for this opportunity. And most importantly, thanks to my team at BlogAdda – this one is for you. Without your hard work and active support, nothing, I repeat nothing would be possible. You guys rock! 🙂