The Acorn is a Canadian indie folk band from Ottawa, Ontario, formed in 2003. Coincidentally at around the same time, our next interviewee started his blogÂ  ‘The Acorn’. 🙂 We are pleased to welcome Nitin Pai, of The Acorn at your Adda. We talk about foreign policies, Indian Government, his thoughts on various other issues and much more in this compelling interview. Enter the world of The Acorn! 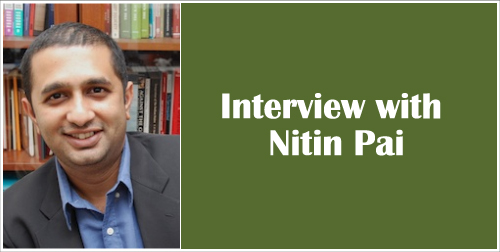 A: My good friend and old partner-in-crime, S Jagadish, introduced blogspot to me in 2003. I thought it’s an excellent medium for me to write restaurant reviews, experiments with recipes and generally about food, and did so until September 2003. At that time, US troops had defeated Saddam Hussein’s regime and President George W Bush requested Prime Minister Atal Behari Vajpayee for Indian troops to stabilise the country. Natwar Singh, the Congress spokesman, objected to this on what I thought were reflexive, dogmatic grounds.

I wrote a letter to the Indian Express pointing out how sending Indian troops to Iraq will release US troops to fight in Afghanistan and how this is in India’s interests and why we treat Bush’s request favourably. They didn’t publish it, so I sent it to the New York Times. They didn’t publish it either. So I thought of posting it on my food blog, but that would have been out of place. So I created a new blog, The Acorn, and posted it there.

A: No I don’t. I post when an argument forms in my mind, usually after a cup of coffee.

A: What is satisfying is that we — and by “we” I mean the bloggers on INI — have been able to take small, sustainable steps from blogs to a serious magazine to a networked think tank. We could never have done this were it not for the internet. Our work resonates with like-minded people, and we provide an avenue for them to realise their passion to make India a better country. So it is most fulfilling when people contact me out of the blue, offering to circulate Pragati, join as Takshashila members or help organise our Roundtable Conclaves.

Q: ‘International relations’ – 2010 was the year when the Presidents of Superpower came calling. What role do you foresee India playing in International Relations in 2011?

A: It’s important to distinguish form and substance. Summits, a place at the UN Security Council and other high-profile engagements captures popular and media attention, but the real business is to what extent India is able to promote its interests. As I write in The Asian Balance, my Business Standard column, the big question is to what extent can India contribute to the balance-of-power in East Asia. To what extent can New Delhi break the faulty mindset that our neighbourhood consists of only the countries across the land borders — the countries of South East Asia, East Africa and the Middle East are our neighbours too.

Also, I do not accept the conventional wisdom that we have a ‘Pakistan problem’. Rather, we have a problem with the countries that scaffold it — the United States, China, Saudi Arabia and others. India should be dealing with these countries to ensure that their actions do not damage India’s interests.

Q: Rising Prices and thereby controlling Inflation is going to be one of the key challenges for India in 2011. What are the other challenges you think the Indian Government will have to overcome in 2011? What are the measures that need to be taken to curb this?Â

A: Rising prices and corruption scandals are symptoms of the same underlying disease — the reluctance to implement second-generation economic reforms. Instead of going through with this, the UPA government — ironically under the man who played a role in the 1991 reforms — has turned the clock back. Massive spending schemes like NREGA have damaged the fiscal position, created inflation and worse, an entitlement economy.

Implementing labour reforms, a national property rights regime, liberalising economic sectors from education to defence to retail are the best ways to achieve inclusive growth. Sadly, the UPA thinks throwing money and slogans will do the trick. While the BJP wants to become a centre-right party, it lacks the conviction to trumpet the achievements of the centre-right NDA government, and to challenge the Congress party’s centre-left agenda.

Q: 2010 was a year of scams. R Sukumar (Managing Editor, The Mint) has predicted at least one big Corporate or Financial Fraud to come into light. What are your thoughts on the same? Do you see more scams being unearthed this year?

A: No idea at all. The “coming to light” of scams and scandals is invariably linked to the political dynamics which I do not follow in depth.

Q: Lobbyists and Policies go hand in hand everywhere and especially in India. There are many incidents where lobbying has been proved successfully in defining or tweaking the policies to personal interests. What is your take on it?

A: Lobbying is necessary in a complex federal democracy like ours. It is better to bring it to the open and professionalise it rather than allow murky backroom operators to be the only type of ‘lobbyists’ we have. Like lawyers, chartered accountants and advertising agencies, it’s time for us to professionalise the trade. While we are at it, we should also legalise prostitution and professionalise the ‘middleman’ industry in defence contracts.

We are letting prudishness and its mirror image, hypcrisy, get in the way of having a clean system.

Q: ‘Vishnu and the Missing Minarets‘. What were your learnings from this incident? Do you think Mainstream Media is feeling insecure and trying to regain the trust they have lost through their own doing?Â

It’s not that the mainstream media is feeling insecure — they are feeling too secure, for good reason, because of the symbiotic relationship they enjoy with the political class. They fail to realise that they are losing credibility with the educated Indian, who, thanks to mobile data and twitter, are increasingly online. This is a generalisation, of course, and there are many exceptions, but I think mainstream media needs to approach social media with greater humility.

It must also be said that Indian public discourse, in general, lacks civility and decorum. It’s especially so on twitter. There is no reason not to be polite and civil. Yes, it is possible to have the strongest disagreement without resorting to abuse, insults, threats or worse. If bloggers and twitterers want to be taken seriously, it is important that they take care not to be shrill or abusive.

Q: Iran uprising, #wikileaks and now Tunisia. These are some of the examples where Online Media played a very important role. How do you think the Online Media will influence the government and its policies in the near future?Â

A: Yes, but not in the way you suggest. Colour revolutions or the Obama campaign might use social media as a force multiplier, but they are still examples of 20th century politics. What is more interesting is that the Internet has created new imagined communities and galvanised old ones, and these will shape the new politics of our age. I discussed this in a talk I gave in New Delhi in December 2010.

A: The rights: Investing in the strategic relationship with the United States and not getting provoked into an armed conflict with Pakistan or China.
The wrongs: The rest. But seriously, the list is long and open ended: the inattention to the growth of jihadi terrorism in India, the strengthening of the Maoist movement, lack of economic reform, rewarding competitive intolerance, neglecting East Asia until recently…

Q: Suggest 10 policies that needs to be implemented to help India become a real powerful giant.

A: I have only one. Implement Reforms 2.0 — that single policy will transform India within and without.

Q: If not an independent journalist, what would have Nitin Pai be doing to earn a living?

A: Not too sure. Designing satellites, laying undersea cables or running an underground coffee & whiskey joint. But I’d try living off my wife’s salary first.

Q: Are we going to see book authored by Nitin Pai in the years to come? Any exclusive tidbits about it?

A: I’d like to, but I haven’t found the time and inspiration for one.

Q: If you were to interview an Indian Politician, whom would it be and what will be the 3 questions you would want to ask him/her?

A: I do not promote my blog. Somehow I’ve never felt the need to, perhaps because the subjects I deal with are such that people who want to read that stuff will find it anyway.Â Some of my friends have offered to optimise my blog for search engines, but I’ve never got down to this. I might do it, but so far, it hasn’t seemed to be a priority.

A: If you are making serious arguments and someone takes the trouble to post a serious response, it is both polite and useful to engage in the discussion. This benefits both parties and to other readers.

It is important to raise the quality of discussion. If you persist, there is a good chance that your comments section will become a place where serious discussions and good friendships are made.

A: At first, it was just a place for me to collect my thoughts, and allowed me to compare my current thinking with my past positions, and see whether and why they changed. But soon I realised that my writing was influencing minds — I realised this for the first time when a person I met said that he formed his political views and made a career choice thanks to my blog. It was mildly frightening. It still is.

A: We lack good blogs on current affairs, public policy and suchlike. We have a lot of people who rant, but relatively few who discuss issues seriously.

My five favourite blogs? In addition to the ones on INI, I’d say

But it’s a hard call, and I’m sure I’ve offended many of my good friends by not mentioning them.

A: Just do it. Be responsible for what you write. Don’t write anything that you wouldn’t want to be heard saying in decent company.

A: Not really. I’ve got Google Ads turned on, that’s all.

Book: Hitchhiker’s Guide to the Galaxy

Nitin, thank you so much for taking out time for this interview. Readers, hope you enjoyed reading the interview and learnt a lot as we did. More such interviews and more fun will happen in the coming weeks at your Adda. Watch this space!