Good morning cuties! It’s time to get a big curve on your lips, as we bring to you the best #PerkyTweets of the week. Get absorbed into some giggles and chuckles and kick start your Monday morning. Gear up for a good laughter treat with these funniest ever tweets by some enthusiastic twitteratis. Read these quick-witted tweets and share some laughter quotient with your friends and family! 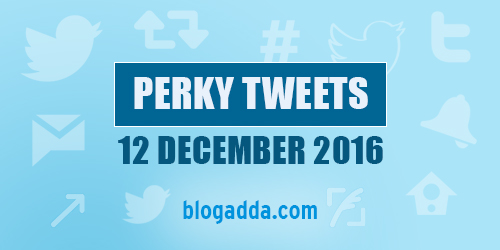 @blogadda #PerkyTweets who says earthquakes are natural calamities;ask RaGa ,he can generate them at will !!!!

HE: You don't have feelings.
ME: Oh Please. I feel hungry every hour.#Perkytweets @blogadda

Neha is not just a name… it is a community.#perkytweets @blogadda